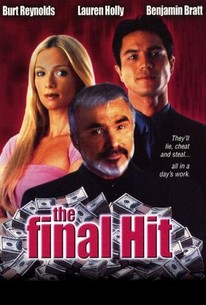 The Last Producer stars Burt Reynolds (who also directed) as burned-out Hollywood movie mogul Sonny Wexler. Once the fair-haired boy of Tinseltown, Wexler finds himself persona non grata in a city now run by younger, leaner, hungrier, and more ruthless studio CEOs. In a last-ditch comeback effort, Sonny tries to purchase a script from a novice scrivener that bids fair to be the hottest property in years. Unfortunately, the hero may be beaten to the punch by a nasty upstart executive who will stop at nothing -- not even murder -- to get his hands on the script. Most of the film is devoted to Sonny's frantic efforts to raise the necessary 50,000 dollars from his alleged friends, his estranged family members, and a handful of raffish-looking types with mob connections. And believe it or not, this is a comedy. Evidently intended for theatrical release, The Last Producer made its first appearance via the home-video market in Europe in 2000. The film was not widely shown in America until its USA Network cable-TV debut on February 6, 2001.

Critic Reviews for The Final Hit

There are no critic reviews yet for The Final Hit. Keep checking Rotten Tomatoes for updates!

There are no featured reviews for The Final Hit at this time.