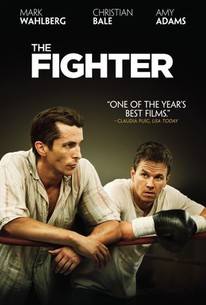 Critics Consensus: Led by a trio of captivating performances from Mark Wahlberg, Christian Bale, and Amy Adams, The Fighter is a solidly entertaining, albeit predictable, entry in the boxing drama genre.

Critics Consensus: Led by a trio of captivating performances from Mark Wahlberg, Christian Bale, and Amy Adams, The Fighter is a solidly entertaining, albeit predictable, entry in the boxing drama genre.

Critic Consensus: Led by a trio of captivating performances from Mark Wahlberg, Christian Bale, and Amy Adams, The Fighter is a solidly entertaining, albeit predictable, entry in the boxing drama genre.

Mark Wahlberg stars in Paramount Pictures' inspirational docudrama exploring the remarkable rise of Massachusetts-born, junior welterweight title winner "Irish" Micky Ward. A determined pugilist whose career in the ring was shepherded by his loyal half-brother, Dicky (Christian Bale) -- a hard-living boxer-turned-trainer whose own career in the ring was nearly sent down for the count due to drugs and crime -- perennial underdog Irish Micky rebounded from a disheartening series of defeats to win both the WBU Intercontinental Lightweight title and the WBU Light Welterweight title thanks to a fierce combination of determination and hard work. David O. Russell directs from a script by 8 Mile's Scott Silver and Paul Attanasio (The Bourne Ultimatum). ~ Jason Buchanan, Rovi

Sean Eklund
as Man in Diner

A. Joseph Denucci
as Man on Street #1

Richard A. Eklund
as Man on Street #2

Jack Greenhalge
as Man on Street #5

Kevin Paige
as Man on Street #6

David A. Ramalho, Sr.
as Trainer

Rita Mercier
as Woman on Street #1

Deborah Bolanger
as Woman on Street #2

Kerry Moore
as Woman on Street #3

News & Interviews for The Fighter

View All The Fighter News

Both Wahlberg and Bale are excellent in their different registers, as are Melissa Leo and Amy Adams as the differently calibrated women.

Wahlberg, always so physically solid, is deep inside himself in this role.

The Fighter looks at first as if it is going to be a far more interesting movie than the straightforward and even rather undemanding drama we finally get.

Russell throws so much at the screen that there is little time to make your mind up.

[A] rickety, unfocused contraption of a film that sputters and chugs along without offering any hint of why its director thought it was worth making.

The film bounces us from one pugilistic or domestic affray to the next, only coming to a near-standstill whenever Wahlberg gets acting space. It goes to show.

Based on a true story, The Fighter runneth over with raw energy, crazy action, and the highly seductive, brainless gallop of people dashing toward the brick wall of their own vanities and fears. It couldn't be more fun.

Boxing fans, yes, there are plenty of wonderful boxing scenes in the movie, and for those not so interested in boxing, the movie is filled with so much more. It is full of family drama and emotional turmoil, with a touch of a love story.

The performances from Christian Bale, Melissa Leo, and Amy Adams in The Fighter are the very definition of a masterclass in acting.

It's pretty obvious which is more interesting.

Russell has taken something tired and familiar and made it rich and exciting once again.

Bale is the real star of The Fighter -- giving a career performance as a man still living off past glory.

Audience Reviews for The Fighter

the thing about boxing movies is that they're boxing movies, it's hard to get out of the rut, yah? rich performances by all concerned in this take, wherein "the fighter"'s biggest fight is with his derelict family: ma (leo, superb as the mom you love to hate to love) dotes on the oldest boy (bale, unrecognisable as a smooth talkin' crackhead hasbeen), rags on the not strong enough current dad (mcgee, honorably in honorless shoes) while supporting a den of useless greek chorus sisters. how to get ahead then? how about listening to nearly faded small town jewel (adams, shimmering)? cliches, yes, american cliches, played out from sea to shining sea every day, transcended here by powerhouse performances, making this a worthy addition into the wealth of american as apple pie boxing movies.

It is always a pleasure to see a sincere drama that doesn't give in to cheap clichés or easy melodrama but is instead a compelling film that simply relies on the power of a true story and the strength of an altogether perfect ensemble cast.

A dysfunctional family both supports and cripples their son's aspiring boxing career. While Wahlberg as the fighter is more or less the obvious choice it's Bale as his drug-using coach and brother who steals every scene and delivers an outstanding (and Oscar-awarded) performance. Same goes for Melissa Leo as their mother. The film works best in the moments that feel very real and often have a great, realistic sense of humor. Only the last act follows the traditional sports drama path a bit too predictably. Overall the result is still highly entertaining and engaging, mostly thanks to the good writing and the stellar performances.

It's so hard to make a boxing film that really stands out anymore, so thankfully, this one didn't really try and did something I respect even more: it's just a damn solid, well-made, and very entertaining film, the occasional predictable moments or cliches aside. If I had to pick something about it (besides the above) that does set it apart, it is the acting, but you probably may have that one figured out (unless you ignore reviews, the Oscars, or internet message boards). The odd thing here though, is that, even though this is about (part of) the story of Micky Ward, the supporting characters (especially Dicky), are such scene stealers and far more memorable, that you'd think the movie is really about them. In a way, this is true. It's mostly about Micky, but more about the role of those aroudn Micky, and how they shape and affect his life, especially his crackhead brother Dicky, trashy, overbearing, selfish mother Alice, and his seven equally trashy sisters. Besides being an underdog story, this film shows the bond of family (no matter how messed up), as well as the effects of being washed up and addicted to drugs. This is a story that could have been told all kinds of ways, and in David O. Russell's hands, it plays essentially like a docudrama. In fact, some of this is so well done and convincing that it seems closer to truth than fiction. It probably helps that locals are used to play themselves or people they know, and that this was all shot on location. Lowell, as shown here, is not really a place I wanna see anytime soon. As I said already, the acting is great, Wahlberg is actually the most low-key and toned down. Maybe that's a good thing. It makes the character less interesting, but everyone else is so over the top and showy that we need a more subtle performance to anchor things. Leo and Bale are tremendous, and their Oscars were well deserved, but they may have laid it on just a tad too thick. Adams is also great, especially since she lays against type, and succeeds. There's not a whole lot new here, but this is a really hard film to dislike, It's pretty solid, but not air tight. They could have made Ward a bit more interesting, and maybe included his trilogy of fights with Gatti, but apparently they are planning a sequel that will focus solely on just that, so there you go. This is very real, but maybe too real, too painful to watch at times. That's not to say that it's unwatchable though, because I certainly was never bored, and always found at least one thing to enjoy frame by frame. Go check this out. I give it a B+