The Farmer Takes a Wife1935 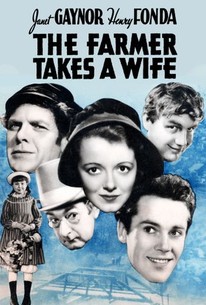 The Farmer Takes a Wife Photos

Henry Fonda made his screen debut in this filmization of his Broadway success The Farmer Takes a Wife. The story is set along the Erie Canal in the 1850s. Fonda plays a farmer who takes a river job to make ends meet. He falls in love with Janet Gaynor, daughter of a canal-boat cook, who thinks very little of farmers. Nonetheless, Fonda and Gaynor marry, much to the displeasure of canal skipper Charles Bickford, who'd assumed that Janet was his girl. When Fonda avoids a fight with Bickford, Janet believes that he's yellow, but he eventually proves otherwise. It is said that during his first day on the set, movie novice Henry Fonda, noting the camera direction "dolly with Dan and Molly" in the script, asked director Victor Fleming who Dolly was. Adapted from the play by Frank B. Elser and Marc Connelly, The Farmer Takes a Wife was remade with Betty Grable and Dale Robertson in 1955.

Mitchell Lewis
as Man in Office

Irving Bacon
as Man on Bridge

Lee Kohlmar
as Townsman with Beard

Robert A'Dair
as Pioneer from Yorkshire

Bert Hanlon
as Townsman
View All

Critic Reviews for The Farmer Takes a Wife

Slow sweet folk comedy, with stock types of the Erie canal days. I thought it over-rated as a play; its importance as a movie may be the introduction of nice Henry Fonda.

The story in general noses along at canal-barge pace, leaving you al! the time in the world to take a rest and enjoy the scenery.

There are no featured reviews for The Farmer Takes a Wife at this time.

The Farmer Takes a Wife Quotes