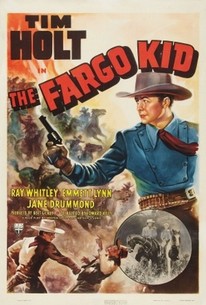 Tim Holt is mistaken for a notorious gunslinger in this average Western, which RKO filmed at Kanab, UT, in tandem with the star's previous effort, the much better Wagon Train. Believed by everyone to be Deuce Mallory, a gunman hired to kill local prospector Caleb Winters (Paul Scardon), The Fargo Kid (Holt) decides to play out the charade in order to trap Nick Kane (Cy Kendall), the corrupt businessman who had ordered the hit in the first place. Things get a bit dicey when the real Deuce Mallory (Paul Fix) rides into town but aided by sidekicks Johnny (Ray Whitley) and Whopper (Emmett Lynn), The Kid manages to prevent the murder, and, in return, earns the love and respect from everyone, including the prospector's pretty daughter, Jennie (Jane Drummond). Ray Whitley performs his own and Fred Rose's "Crazy Ole Trails Ahead" and "Twilight on the Prairie" in this remake of the 1932 Tom Keene oater The Cheyenne Kid, which itself was a talkie version of a 1928 Bob Steele silent, Man in the Rough. ~ Hans J. Wollstein, Rovi

Critic Reviews for The Fargo Kid

There are no critic reviews yet for The Fargo Kid. Keep checking Rotten Tomatoes for updates!

There are no featured reviews for The Fargo Kid at this time.