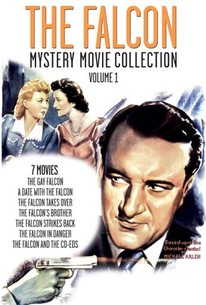 The Falcon Takes Over Photos

The plot of the RKO Radio programmer The Falcon Takes Over will be instantly recognizable to anyone who has seen the 1944 Philip Marlowe mystery Murder My Sweet: indeed, both films were based on the same Raymond Chandler novel, Farewell My Lovely. It all begins when brutish prison escapee Moose Malloy (Ward Bond) forces nervous Broadwayite Goldie Locke (Allen Jenkins) to drive him to a posh nightclub, where Moose hopes to be reunited with his old girlfriend. Unable to find his elusive sweetheart, Moose tears the joint apart, obliging Goldie to flee for his life. As it happens, Goldie is the assisant of private eye Gay Lawrence (George Sanders), aka The Falcon, who has been hired by foppish socialite Lindsey Marriot (Hans Conried) to ransom a necklace stolen from Marriot's lady friend Diane Kenyon (Helen Gilbert). Shortly afterward, Marriot is murdered, and the Falcon discovers that there's an inextricable link between the dead man and the inimitable Moose Malloy. The rest of the film follows the plot convolutions set down by Chandler in Farewell My Lovely, carefully retailed to suit the breezy urbanity of George Sanders as the Falcon. Though Murder My Sweet is the better of the two versions of the Chandler novel, The Falcon Takes Over has a few advantages of its own, notably the casting of future Oscar winner Ann Revere as blowzy murder suspect Jessie Florian.

Critic Reviews for The Falcon Takes Over

There are no critic reviews yet for The Falcon Takes Over. Keep checking Rotten Tomatoes for updates!

Audience Reviews for The Falcon Takes Over

There are no featured audience reviews yet. Click the link below to see what others say about The Falcon Takes Over!

The Falcon Takes Over Quotes