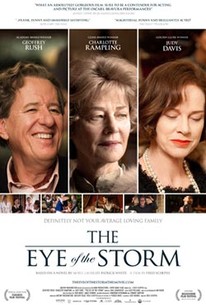 The Eye of the Storm Photos

In the Sydney suburb of Centennial Park, two nurses, a housekeeper and a solicitor attend to Elizabeth Hunter as her expatriate son and daughter convene at her deathbed. But in dying, as in living, Mrs Hunter remains a powerful force on those who surround her. Based on the novel by Nobel Prize winner Patrick White, The Eye of the Storm is a savage exploration of family relationships - and the sharp undercurrents of love and hate, comedy and tragedy, which define them. -- (C) Official Site

Dustin Clare
as Col
View All

News & Interviews for The Eye of the Storm

View All The Eye of the Storm News

Critic Reviews for The Eye of the Storm

It is funny and sad in patches, but never comes completely alive, perhaps because there isn't a single character with whom you can feel fully in sympathy.

The movie proceeds at a measured and reverent pace, a little unfocused, but with intelligent performances from three heavyweight acting talents.

Some very game performances are let down by weak source material.

Has taken almost two years to reach the UK; you'd be forgiven for thinking it was far longer, given its sub-Joseph Losey pretensions and doily-like styling.

Sumptuously photographed, and darkly comic, The Eye of the Storm is definitely a title worth seeking out.

The leads make a meal of their roles in the best possible sense, while the director's daughter, Alexandra Schepisi, makes a major impression as love-seeking nurse Flora.

It's beautifully cast, deliciously well-acted and wickedly funny at times.

The film circles (slowly, like an overfed vulture) around the protracted death of a savage matriarch played, with no concessions to subtlety, by Charlotte Rampling.

It's a chilly, cruel film about characters that are difficult to like or warm to, and it obviously means a great deal to a country that for so long rejected its greatest writer.

Although the story holds much premise, The Eye of the Storm survives mostly off the performances of the leading cast members.

Audience Reviews for The Eye of the Storm

Rich matriarch Elizabeth (Rampling) finds herself living out her final days in the hands of two nurses and a devoted Jewish cook. Sniffing out their impending inheritance, her two children, Basil (Rush) and Dorothy (Davis), return from Europe for a final reconciliation. Basil is a fading star of the London stage while Dorothy is struggling to maintain a lavish Parisian lifestyle following her divorce from a European Prince. Both have a tense relationship with their mother and have shown her little attention previously, something the dying woman is all too happy to remind them of. I've often sung the praises of Australian cinema but along comes Fred Schepisi's adaptation of a popular Aussie novel to leave me with platypus egg on my face. Schepisi was part of the Australian New Wave, a collective of film-makers from the country (and New Zealand) who emerged in the seventies with a series of landmark films like Peter Weir's 'Picnic at Hanging Rock', Ted Kotcheff's 'Wake in Fright', and Schepisi's own 'The Chant of Jimmie Blacksmith'. Like the Australian outback, they were beautiful and challenging, often thinly hiding a deep-rooted colonial guilt. In the eighties, the various members of this movement left for the U.S, with mixed results. Schepisi, 'A Cry in the Dark' excluded, found himself lost in the fog of Hollywood mediocrity, helming comedies like 'Mr Baseball' and 'Roxanne'. Now he's returned to his homeland but, sadly, it's a return as bland as any of his American paycheck films. Schepisi's direction is impressive, clearly influenced by Robert Altman, and the trio of lead performances are terrific, as you'd expect from such actors. The problem lies with the script, as bland and uninvolving a piece of drivel as you could hope to find. Australian readers won't like me saying this but 'TEOTS' feels very much like a British film, the sort that features lots of characters sipping tea and saying "bugger" for comic effect. Come on Oz, I know you can do better. Last year you thrilled us with 'Sleeping Beauty' and 'The Hunter'. This year you've started by putting us to sleep with tea and mediocrity.

'The Eye of the Storm'. Three brilliant central performances and a 2nd to final, climactic act that was perfect!

The Eye of the Storm Quotes