The Execution of Private Slovik (1974) 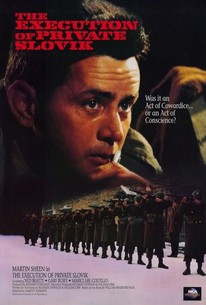 In 1945, private Eddie Slovik, a "born loser" who made no secret of his desire to escape the army in any way possible, became the first American to be executed for desertion since the Civil War. William Bradford Huie's chronicle of this unfortunate wartime episode, The Execution of Private Slovik, was published in 1954. Frank Sinatra optioned the movie rights for the book, intending to cast Steve McQueen as Slovik and to have blacklisted writer Albert Maltz write the screenplay. The US military reluctantly agreed to okay the film on the proviso that Slovik would not be portrayed sympathetically. Out of deference to his friend John F. Kennedy, Sinatra abandoned the project, and that was that -- until the award-winning TV-writing team of Richard Levinson and William Link became intrigued in the Huie book. After a series of convoluted negotiations, Levinson and Link were finally able to put The Execution of Private Slovik on the small screen on March 13, 1974 (Albert Maltz, upset that the pair had decided upon a strict "no villains" policy in their adaptation, washed his hands of the whole affair). Martin Sheen was selected to play Slovik, though for a while Dustin Hoffman was seriously considering taking a cut in salary to essay the role. Abandoning the linear style of Huie's book, the writers adopted a Citizen Kane approach, using flashbacks to illustrate the events leading up to the execution. It is made clear throughout the film that no one, neither the military brass nor Slovik himself, truly believed that the private would ever face a firing squad; the usual custom was to postpone the execution until after the war, then reduce the sentence to a long prison term. Thanks to an unfortunate chain of misunderstandings and snafus, Slovik ended up dying by gunfire in a lonely French courtyard -- a fact long withheld from the public (Slovik's wife Antoinette learned of her husband's true fate for the first time from author Huie). The film's most famous scene, in which Slovik nervously repeats his "Hail Marys" as the hood is being fitted over his head, was Martin Sheen's own idea. Filmed on location in California and Canada, The Execution of Private Slovik won a Peabody award for the NBC television network. Originally running a full 120 minutes, it was re-edited into a 97 minute version for theatrical release overseas.

Critic Reviews for The Execution of Private Slovik

The film is not only fine theater but a thoroughly convincing piece of history.

This is one of Lamont Johnson's best movies -- a product of a good script, but one resents a certain indifference. [Full Review in Spanish]

There are no featured reviews for The Execution of Private Slovik at this time.

The Execution of Private Slovik Quotes