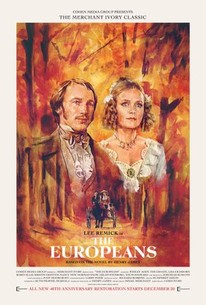 In the middle of the 19th century, the stern and somewhat puritanical values of native New Englanders were little changed from early Colonial times. In this adaptation of Henry James' novel The Europeans, The Countess Eugenia (Lee Remick) and her brother Robert (Robin Ellis) are expatriate Americans who have grown up mainly in Europe. They have also grown accustomed to living well and have returned to see their New England relatives to try and take advantage of their prosperity by contracting an advantageous marriage with one of their wealthy cousins. The American cousins see them as charming, well-educated, and shockingly dissolute. Despite some successes, Eugenia is unable to achieve her objectives, but Robert fares somewhat better. ~ Clarke Fountain, Rovi

News & Interviews for The Europeans

Star Wars: The Rise of Skywalker Feels Perfunctory but Gets the Job Done

View All The Europeans News

Critic Reviews for The Europeans

But what's attractive about revisiting "The Europeans" now is how it's more indie-flavored, its pleasurable finery and delicate ironies... befitting a novel whose lightness of tone James himself recognized when he subtitled it "A Sketch.

Staged with affection, insight, a whole fistful of superb performances and exquisite settings.

The achievement of Mr. Ivory and Mrs. Jhabvala is their preservation of so much James, so purely, in what's thought to be a hostile medium.

The Europeans is finally just all surface: illustrations for the novel.

The first of three Henry James adaptations produced by the Merchant Ivory team, this is an entrancing entry not just in their partnership but in the career of Ivory himself.

There is a certain allure to a movie that plays hard to get. The Europeans expects you to meet it halfway. When you do, you're rewarded with a story that's rich with complicated emotions, despite its self-confident exterior.

It's a little turgid compared to [Merchant and Ivory's] later work... But it's quite an interesting film in the overall body of work.

With everything so tamped down, the tiniest resemblance of an emotional response can be overwhelming.

The Europeans is on all counts a pleasing film, and while students of Henry James' work will most likely not be disappointed in the adaptation, those who have never read a word of the man may obtain a thoroughly respectable view

This adaptation helped put James Ivory in the public consciousness for these Henry James costume dramas.

I found myself hoping that several of the storylines, and the poor acting that accompanied them, would simply disappear.

Audience Reviews for The Europeans

The cinematography is very beautiful, and Lee Remick gives a fine performance but the rest is sort of listless, although the period detail is impressive.