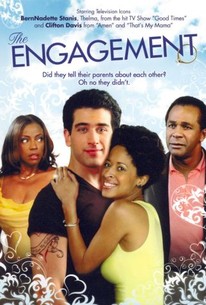 A Jewish-American/African-American couple gives their respective families the shock of their lives when they announce their engagement and preparations begin for the big day. David and Mia are a racially-mixed couple who have found true love in looking beyond the shade of their skin. But just because these two young lovers can overlook their obvious differences doesn't mean that their respective families will be able to do the same, and when David's parents throw him a surprise engagement party the cat is finally out of the bag. The divide grows when David's family demands a traditional Jewish wedding despite the fact that Mia's parents had their hearts set on a Baptist ceremony. On the day of the wedding the tensions continue to rise, leaving some guests to wonder whether the union will implode before the bride and groom can even exchange vows.

Critic Reviews for The Engagement

There are no critic reviews yet for The Engagement. Keep checking Rotten Tomatoes for updates!

There are no featured reviews for The Engagement at this time.