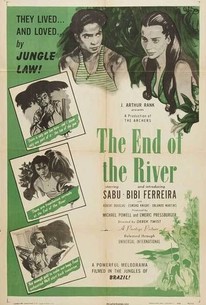 East Indian actor Sabu is consistently better than his material in the sociological melodrama End of the River. The story concerns Mancel (Sabu), an Akuna Indian youth living in the forests of Brazil. Betrayed by a treacherous tribal chieftan, Mancel is branded an outlaw and exiled from his village. Forced to scrounge for a living in the white man's world, he runs afoul of corrupt political forces, ending up on trial for his life. The defense counsel (Maurice Denham) tries to convince Mancel that not all white men are demons, and to help the boy come to terms with his own inner turmoil. Despite its powerhouse cast, End of the River suffers from indifferent and sometimes downright lackadaisical performances; still, it deserves praise for trying to tackle a difficult subject with a semblance of intellence. ~ Hal Erickson, Rovi

Peter Illing
as The Ship's Agent

Andreas Malandrinos
as Officer of the India Protection Society

Andrea Malandrinos
as Officer of the India Protection Society

Arthur Goullet
as The Pedlar

Russell Napier
as Padre
View All

Critic Reviews for The End of the River

A monotonous series of flashbacks break the even development of the plot and it is difficult at times to keep track of the characters around whom the story is built. The result is that interest is lost and the film becomes boring.

There are no featured reviews for The End of the River at this time.

The End of the River Quotes