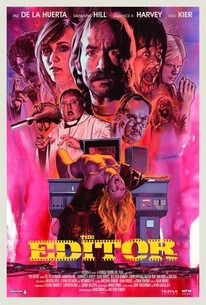 A film editor with wooden fingers becomes the prime suspect in a series of gruesome murders in this outrageous homage to the Italian giallo films of the 1970s and '80s. Rey Ciso (co-director Adam Brooks) used to be one of the world's best film editors. But that was before the accident that robbed him of all four fingers on his right hand. Subsequently outfitted with a wooden prosthetic, Rey now toils away editing lurid genre films in Italy. Rey seems to have reached the end up his rope when a sadistic killer begins stalking the cast of the latest film he's editing. Now, Rey must race to prove his innocence to the detective (co-director Matthew Kennedy) who seems to have his number. Meanwhile, should the besieged editor fail to catch the killer soon, he could end up becoming the next victim. Udo Kier, Tristan Risk, and Paz de la Huerta co-star.

Critic Reviews for The Editor

Even those who get the joke here may find it wearing thin after a while.

In turning to the giallo with their new film The Editor, an especially mean-spirited horror subgenre, the filmmakers leave an especially bad taste.

The Editor does its best to out-genre the genre, lovingly piling ridiculous complications and demented flashbacks on top of unconvincing dubbing, perfect genre references and plenty of nudity and gore.

It's not as much fun as it should be, and while you can certainly admire the skill of the filmmakers in adhering to giallo conventions, you need to be in a midnight-movie frame of mind to really appreciate this film.

The giallo satire we've all been waiting for. All 19 of us.

a knowing pastiche of the giallo genre, so incoherent and ridiculous it could almost pass for the genuine article... felt at times overstretched and perhaps could have done after all with the touch of "the world's greatest editor".

The Editor is probably the coolest film you'll see this year and one you'll want to partake of again and again and yet again.

The Editor starts off as a pitch-perfect Giallo spoof, but struggles to consistently maintain the same perverse entertainment factor until the film's bloody finale.

A well worked and occasionally well-sustained satire of the wonderfully sleazy Italian murder-mystery melodramas from the 1960s to the '80s ...

Audience Reviews for The Editor

There are no featured audience reviews yet. Click the link below to see what others say about The Editor!