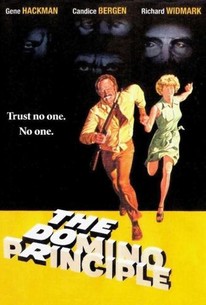 Stanley Kramer directed this paranoid thriller involving a murderer who is inexplicably released from prison by a mysterious organization. Gene Hackman is Roy Tucker, serving time in San Quentin when he's busted out by a secret organization in return for having to assassinate an unnamed person. Roy travels from San Francisco to Spain trying to find out why he was released from prison and who he has to kill. His only lead is the organization is run by a collection of unknown people, collectively known as "They."

Edward Albert
as Ross Pine - a member of the organization

Critic Reviews for The Domino Principle

With a lame script and the leaden hand of Kramer's direction, it blows most of its chances.

...a stirring thriller that succeeds despite a narrative that is, to put it mildly, rather far-fetched.

Falls apart and goes downhill at such a snail's pace, all you can say is, "Who cares!"

Stanley Kramer was obviously trying for a message with this film, but it got lost within the intricate plot twists.

Audience Reviews for The Domino Principle

Late 70's conspiracy theorists unite as convict Hackman gets recruited to do a bit of dirty work for a clandestine organization with seemingly unlimited resources and funding. Not a bad vehicle to entertain but the execution leaves a lot to be desired, namely coherency. The actors do their part but the scenario is specious to say the least.