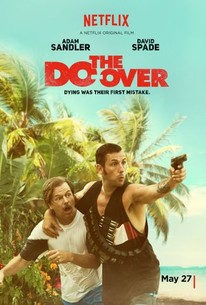 In The Do-Over, Adam Sandler plays "Max" and David Spade plays "Charlie," old friends tired of their mundane lives who reunite at their 25th high school reunion for the ultimate mulligan: they decide to wipe the slate clean for a do-over. After faking their deaths and assuming new identities, could their lives be better the second time around?

Torsten Voges
as The Gymnast

Robert Smigel
as Doctor
View All

News & Interviews for The Do-Over

View All The Do-Over News

Critic Reviews for The Do-Over

Typical Adam Sandler fare in every way, from the raunchy humor to the inclusion of his buddies to the deplorable view of women to the vacation disguised as a movie shoot to the forced sentimentality in the final act.

Surely this movie must be almost over, you think, as you jab the pause button on your remote - only to find you are at the 50-minute mark with another 58 to go.

Once the actual story element of The Do-Over kicks in, the movie's periodic lurches back to gross-out humour seem increasingly out of place.

The '90s version of The Do-Over would have paired a snarky, cowardly Spade with a goofball weirdo Sandler. Now they're just two more bros-before-hos.

A film that gets markedly dumber with every passing minute.

The plot threads can be a little hard to follow ... but Sandler and Spade's partnership gives the whole enterprise enough emotional grounding to make up for it.

I'm not even outraged anymore by these movies. I'm just like, "why?"

The Do-Over is a throwback to classic Adam Sandler films and, while ridiculous, is still a fun ride.

The Do-Over, Adam Sandler's second Netflix film, is what happens when a successful artist is given lots of money and very little direction.

"The Do Over" is a great step forward from "The Ridiculous 6", but it's not enough to make your time worthwhile. [Full review in Spanish]

Just as predictably mind-numbing and tedious as any other comedy Sandler has attached his name to post-Funny People.

Will Ashton
The Playlist
View All Critic Reviews (23)

Audience Reviews for The Do-Over

Disappointing farce meets ideal demographic's wish fulfillment. An excuse for cast and crew to shoot in beach locales. Far cry from the 90s movies that forever made these two stars (though rewatch those and I guarantee you'll realize that they aren't as good as you thought they were when you were a kid, teen, young adult, new parent, whatever general young person you were in the 90s).

I promised myself never to watch an Adams Sandler film again, angry at the laziness of his features (like the bad kid in class daring the teacher and disrupting the class only so long as no learning gets done) but having relented, this one although formulaic is not entirely used toilet paper. There are plenty of beer commercials and Sandler's mean spiritedness to fill a Winnebago, but at least there's a catfight too. Much better than I initially thought it would be.

Where do I begin? Well, over the years Adam Sandler hasn't been a critical or fan favourite, but he has always pleased audiences with his work on television's Saturday Night Live. That is what launched his career to super-stardom, and while he has had a few hits, such as "Billy Madison," "Happy Gilmore," "The Wedding Singer," "Punch -Drunk-Love," or "Big Daddy," he has never received the reception that I am sure he had been hoping for. It has been happening for a long time, but the complete downwarp spiral of anyone thinking his next film would be impressive, sadly ended in the year 2009. While I do not hate the 2010 release of "Grown Ups," it only got worse from there. What I am waiting for is his comeback. I am an Adam Sandler fan and I always hope he comes around. Is "The Do-Over" the film to do it? Absolutely not. I held out hope that after the Happy Madison studio made a deal with Netflix, they would begin to take a little more time with their stories and have slightly more creative freedom, but "The Do-Over" is the prime example of product over quality of film. With endless amounts of product placements and elegant sceneries, you can just tell that Sandler and his team took a nice long vacation and searched for locations to shoot. There are even a few scenes where you could tell Sandler had been sitting out in the sun for long periods of time, due to his bad sun burns. Setting aside the product that this film is, you can see that this is definitely the studios best attempt at a solid story in a long time. Max and Charlie (old high school friends) happen to bump into each other at a high school reunion, and while Charlie is having a hard time in life with a dead end job, Max shows up just in time to brighten up his days. Taking him on a trip for the weekend, Max blows up their boat and fakes their deaths. Stealing the identity of two recently deceased men, they travel to the home these men were about to purchase and get caught up in a "most wanted" plot. As far as skits go, this would have made for a great story comedic film, but as a full length film, it barely ever manages to gain a laugh and when it does, it feels extremely forced. I will admit, there are a few little plot twists that I didn't mind, aside from the big one that became too confused for it's own good, that I mildly enjoyed. I did chuckle a couple of times and there is one gut-buster that I personally found hysterical. Other than those few elements, this film is pure product, with not much of a film to back it up. David Spade and Adam Sandler did not even share the chemistry you would have expected, due to Adam Sandler looking miserable throughout most of the duration. I do not know what it is about these films, but they just fail to impress on all levels.