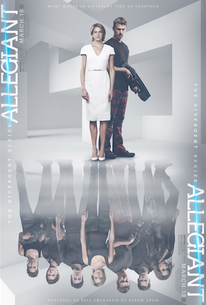 Critics Consensus: Allegiant improves on previous entries in The Divergent Series on a few superficial levels, but they aren't enough to counteract a sense of growing boredom with a franchise that's gone on too long.

Critics Consensus: Allegiant improves on previous entries in The Divergent Series on a few superficial levels, but they aren't enough to counteract a sense of growing boredom with a franchise that's gone on too long.

Critic Consensus: Allegiant improves on previous entries in The Divergent Series on a few superficial levels, but they aren't enough to counteract a sense of growing boredom with a franchise that's gone on too long.

After the earth-shattering revelations of INSURGENT, Tris (Shailene Woodley) must escape with Four (Theo James) and go beyond the wall enclosing Chicago. For the first time ever, they will leave the only city and family they have ever known. Once outside, old discoveries are quickly rendered meaningless with the revelation of shocking new truths. Tris and Four must quickly decide who they can trust as a ruthless battle ignites beyond the walls of Chicago which threatens all of humanity. In order to survive, Tris will be forced to make impossible choices about courage, allegiance, sacrifice and love.

Shailene Woodley
as Tris Prior

Janet McTeer
as Edith Prior

Candace B. Harris
as Bureau Staff

Derek Roberts
as Most Scared Factionless

Mark Hicks
as One Last Factionless

David An
as Factionless Soldier

So there's one more to come. It can only improve on this one, which manages to seem cluttered and empty at the same time.

It's not Allegiant so much as Ambivalent, Indulgent and even a little Feculent.

By this point, none of the pieces fits and absolutely nothing makes any sense.

A nightmarish landscape that's meant to be frightening - or at least unsettling - ends up being hilariously cheesy instead.

Allegiant exemplifies what happens when a book or movie exists solely for the purposes of placating fans and maintaining a revenue stream.

These movies were never going to transform cinema, but watching Allegiant, it's hard not to feel as if someone has pulled the rug out from under an otherwise modestly entertaining franchise.

Allegiant is a cynical agglomeration of YA and dystopia tropes thrown together with little regard for either sound storytelling or effective world building, which wouldn't be bad if it weren't so boring.

The few action scenes involving James and some stimulating visuals earn Allegiant a couple of points on the 10 scale but it has next to nothing else going for it... And there's still a fourth installment on the way.

Fans of the series seemed to be into it, but we found some scenes did not follow or flow.

The series has seen a steady decline from the surprisingly palatable opener, Divergent, with its political metaphors so smoothly handled. It became clunkier with subsequent chapters...

The Divergent series chugs along, its mediocrity transcended, as always, by Woodley and James' commitment.

Perhaps the biggest head-scratcher of all is how a movie can fail so epically with such an amazing cast of seasoned vets and young stars populating the screen at any given moment.

The Divergent series is brought to a close with the suspenseful sci-fi thriller Allegiant. As Chicago breaks down into mob rule Tris and Four escape to the wasteland outside of the city and find a hi-tech community that's trying to rebuild society; but Four soon uncovers a dark side to what they're doing. Jeff Daniels joins the cast and delivers an incredibly strong performance. And the special effects are extraordinarily good, creating some really inventive future tech. However, the plot is rather thin and kind of skims over a number of the events from the book. Also, most of the characters are underdeveloped. Still, while it comes off as a bit rushed and formulaic, Allegiant is entertaining and action-packed.

Theo James is still dreamy yet deadly, Miles Teller is still inexplicably douchey, and Shailene Woodley is still running the gun show, but her steel-eyed resolve only lasts through the first half of the movie. The second half sees Tris as this brainwashed diplomat of sorts manipulated by the system, and she barely gets to emote or say anything or even look remotely cool piloting a stolen pod or not look like a total n00b while wielding new drone gadgetry. Methought the movie ended abruptly with a nonsensical cliffhanger, but come to find out, the Divergent series has jumped on the YA film franchise L-train of splitting the final book into two films, thus ensuring cashflow but also long, dragged out plot points.

While this is a slight improvement over the last film, it still doesn't have the originality of the first. This is the type of film series (and probably book series) that had a cool premise for the first installment but then just kept going after the steering wheel was ripped off. The story seems like it is going somewhere but no one (that hasn't read the books) knows, or as the box office indicates, really cares. Many "plot twists" you really could see coming from a mile away which made the viewing experience even worse. With as many special effects that they put into this one, in order to even break even on the next one, they are going to have to pull the CGI WAAAAY back.

See more reviews like this at chrisbreviews.blogspot.com Just a warning; this film is one of those young adult films. Yeah, those ones. Such series have been done with varying success. We have the Maze Runner that was welcomed in its first installment, but that quickly nosedived in its second installment, with, would you believe it, another one on the way. We have the Hunger Games, which was an overall hit, but for some people ended weakly in its two-part conclusion. And now we have the Divergent series. This one, in my opinion, is the worst of them all. The first installment was fine. The second was terrible. And much like other young adult series; it is having a two part finale, once again redefining the word 'trilogy'. But instead of blatantly calling the films; Allegiant Part 1 and Allegiant Part 2, director Schwentke pulled a fast one on most of us by entitling the final film Ascendant to avoid contraversy. So, with all of these two-part conclusions, we usually see part 1 spending the entire running time by setting things up for and building suspense to its part 2 so you are guaranteed to go see it to satisfy your curiosity. This is usually why these films don't rate very well. However, Allegiant decides to ditch that idea and give viewers no plausible reason, or even a decent cliffhanger to want to see the final film. Without giving too much away, the ending seems to be building to a grand ending, and then it just cuts away to the credits without even the sound of a drum. And what they call a cliffhanger is anything but, I have quite frankly had enough of these movies. For fans of the books, I was one too, and I know that Allegiant was the weakest book by far, but they don't even try to stick to the book. You know that major death that happens that causes a rift between our characters, the one which would have made a decent cliffhanger for this film? Yeah, that doesn't happen. We only get a two second glimpse of them in the entire film. This film is, in every way, a disappointment. The plot is dull. At the end it gets to a little bit of a climax but even at its peak we have two parties talking to each other through a glass door. Dull. There are plot loopholes everywhere in this movie, and they once again tried to out-technology themselves. Like Insurgent, the futuristic technology in this movie looks so CGI-heavy and fake that you don't even try to believe it's real. There is a death or two in this movie which is greeted by these terrible young actors saying their name a few times, apparently expressing their sadness, before switching focus back to the futile mission at hand. Honestly, I don't understand how at least one of the characters in this movie doesn't have an existential crisis. The cast has a couple well-known names who were regrettably dragged into this mess but is mainly the same cast as Insurgent with one or two additions. Shailene Woodley, Theo James, Ansel Elgort, Miles Teller, Zoë Kravitz, Naomi Watts, and Octavia Spencer reprise their roles with newcomer Jeff Daniels as the new enigmatic totalitarian leader. In terms of acting... not much to talk about. Shailene Woodley is being a motivational speaker, Theo James was only hired for his body (which isn't even displayed this time round- so he's basically obsolete), watching Ansel Elgort run never fails to amuse, Miles Teller has potential as an actor, but unfortunately got dragged into this, so he just makes sarcastic remarks the entire film, and it's disappointing to watch Zoë Kravitz- who is meant to have a major role in this series- take a backseat. The characters were all dull. Tris is not interesting as a protagonist, especially since this whole movie is her either controlling drones that do all the work or having conversations with Jeff Daniels' character. Most of the major characters; such as Christine- have taken a backseat, and the others that are left settle for mediocrity. The chemistry between Tris and Four remains non-existent. Genres include action, adventure, drama, and romance with comedic relief from Miles Teller's character. The setting is intriguing that our characters discovered their whole world is a lie and that it's expanded to an apocalyptic wasteland, however unoriginal such a wasteland may be. Themes include acceptance, anti-prejudice, and stability of society. I respect that the faction system was meant to represent putting labels on people in society. One risk made in this film is the use of silence, both during a scene during the film and in the initial cut to credits. This risk did not pay off. The futuristic tone the director was trying to set came of as quite tacky. Both the Maze Runner and The Divergent Series have utilised this shock tactic of a group of young people discovering a wider world than the one they knew. The running time of this is 121 minutes of wasted time. To conclude, unless you are a fan who just needs closure on these movies or a person who likes to make sarcastic remarks in the cinema about terrible films, don't see this film. And I use the term film very loosely. I look forward to the final installment of the Divergent series; Ascendant set for release on 9th June 2017, because then this appalling monstrosity will be over.