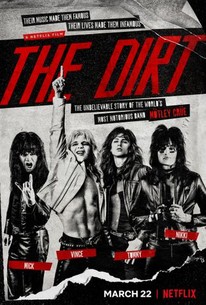 Critics Consensus: The Dirt celebrates the rude debauchery that Mötley Crüe's fans enjoy -- but does so with the dispiriting lack of substance that the group's critics have long decried.

Critics Consensus: The Dirt celebrates the rude debauchery that Mötley Crüe's fans enjoy -- but does so with the dispiriting lack of substance that the group's critics have long decried.

Critic Consensus: The Dirt celebrates the rude debauchery that Mötley Crüe's fans enjoy -- but does so with the dispiriting lack of substance that the group's critics have long decried.

Based on the bestselling autobiography from Mötley Crüe, the film is an unflinching tale of success and excess as four misfits rise from the streets of Hollywood to the heights of international fame.

News & Interviews for The Dirt

View All The Dirt News

Critic Reviews for The Dirt

It's very regressive in its politics.

This is rock bad-boy lore as a rocking bore, an endless parade of recreated afterparty ecstasy and emptiness that robs The Dirt of the vicarious thrill it had on the page.

None of it adds up to much beyond painting the band, despite their often repellently bad behavior, in a flattering light.

It's just a thinly written VH1-style sketchbook of a movie - which is to say, it's a Netflix film, with zero atmosphere, overly blunt lighting, and a threadbare post-psychological telegraphed quality that gives you nothing to read between the lines.

Its own pointlessness may keep The Dirt from feeling like an actual affront to humanity, but that doesn't make it very good, either.

It's as if the film arrived to the streaming service in a bubble, unaware that the culture has moved on and that Netflix is brimming with content written, directed and starring strong women.

If you're not familiar with the band, this'll be quite a shock. If you are, you'll have fun but be left wondering what could've been.

If you get queasy easily, definitely just watch Pete in Set It Up instead.

Vince Neil may have wailed to take me into his heart in "Home Sweet Home," but after watching this poorly acted, laughably juvenile adaptation of his band's tell-all chronicle of the same name, I'm ready to run in the other direction.

Slapstick biography that does a pretty good job at confirming not all bands should have their own portrait in a feature film. [Full review in Spanish].

The Dirt is an honest trash, coherent with the band it pays tribute to, if compared to the calculated, sweetened and aseptic Bohemian. [Full Review in Spanish]

Netflix's The Dirt tries to tell a 'no-nonsense' account of Motley Crue's notoriously lavish existence, only to end up confused (and, at points, unnecessarily misogynistic).

Audience Reviews for The Dirt

Biopics revolving around classic bands have definitely become a fad these days, even though they have been around for decades. The Dirt is the latest in the long line of musical biopics and this time it's hitting Netflix. As Motley Crue isn't exactly one of the greatest bands of all time to many people, their music has absolutely resonated with many listeners. Not knowing anything about the lives of these four men before going in, I'm pleasantly surprised that this story had a lot more to offer than the average biopic. Still, it does follow the tired formula, but that's okay, because it's done quite well here. Following Nikki Sixx, Vince Neil, Tommy Lee, and Mick Mars as they form an unlikely group of misfits, this band quickly shoots to superstardom, which ultimately leads to a life of sex, drugs, and rock n' roll. This premise has been done to death through the years, so the only thing to truly keep you interested in movies like this is the content itself. From car accidents to overdosing, this is a film that keeps you engaged from start to finish. Sadly, the material presented throughout the majority of the film is quite unlikeable, to say the least. You can't help but be disgusted by the actions of most of these men, but the music and shocking turn of events is why you watch movies like this, so for that reason, it all blends together quite well. Still, many viewers will be turned off by this film in the first five minutes, guaranteed. If you're in for a wild ride with sometimes disturbing imagery, bordering on pornography or actual footage of heroin overdosing, then I think you'll enjoy the movie for what it is. When watching this film, it became clear to me why this film never hit theatres, but that's not because it was bad by any means. Although Vince (the lead singer) is played up as the most unlikeable character throughout the majority of the film, Daniel Webber gave a terrific performance. I would love to see his career explode more than it already has, because I believe he has some real dramatic talent, just waiting to be showcased. On top of that, Iran Rheon is the most likeable actor here and Douglas Booth as Nikki Sixx was great as well. Surprisingly, the breakout performance here is actually from Machine Gun Kelly (Colson Baker). I never would have expected that, but his devotion to this character was a joy to watch. In the end, The Dirt is absolutely defined by its title, because this is a film that showcases the grit and griminess of the rock n' roll underworld. That aspect alone will turn viewers off, but it's a very well-made movie nonetheless. This is by no means one of the better biopics out there, but it's an enjoy film and better than a lot of the content Netflix has been making, in terms of feature films. To fans of MÃ¶tley Crue or fans of a good biopic in general, I would recommend checking this one out. It's fairly standard fare with some surprisingly elements throughout.