The Diary Of A Teenage Girl 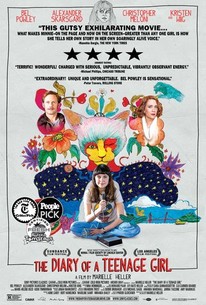 Critics Consensus: Boldly unconventional and refreshingly honest, Diary of a Teenage Girl is a frank coming-of-age story that addresses its themes -- and its protagonist -- without judgment.

Critics Consensus: Boldly unconventional and refreshingly honest, Diary of a Teenage Girl is a frank coming-of-age story that addresses its themes -- and its protagonist -- without judgment.

Critic Consensus: Boldly unconventional and refreshingly honest, Diary of a Teenage Girl is a frank coming-of-age story that addresses its themes -- and its protagonist -- without judgment.

The Diary Of A Teenage Girl Videos

The Diary Of A Teenage Girl Photos

Like most teenage girls, Minnie Goetze (Bel Powley) is longing for love, acceptance and a sense of purpose in the world. Minnie begins a complex love affair with her mother's (Kristen Wiig) boyfriend, "the handsomest man in the world," Monroe Rutherford (Alexander Skarsgård). What follows is a sharp, funny and provocative account of one girl's sexual and artistic awakening, without judgment. (C) Sony Classics

Anthony Williams
as Frankie
View All

News & Interviews for The Diary Of A Teenage Girl

View All The Diary Of A Teenage Girl News

Critic Reviews for The Diary Of A Teenage Girl

Shocking but genuine, poignant and hilarious, Diary of a Teenage Girl could well become one of the more memorable entries in the Sundance Film Festival's U.S. competition.

Most crucially, Heller is more interested in bearing witness to adolescent experience than passing judgment -- and this approach extends to her handling of the adults around Minnie.

Powerful, exhausting, ecstatic, twisted and unerringly honest, "The Diary of a Teenage Girl" is a rare film indeed, a look at a young girl's messy coming of age told completely from the young girl's point of view.

Writer/director Marielle Heller, in her captivating debut film "The Diary of a Teenage Girl," hits exactly the right tone for a complicated balancing act, and for a film that could very easily have gone wrong.

"The Diary of a Teenage Girl" is a breakthrough moment in the culture in that it depicts youthful female sexuality ... not just with the unapologetic frankness the boys usually get, but with an awareness of all the places a girl's urges will take her ...

An honest and personal and unblurred examination (even through that druggy blur) of a tricky voyage into womanhood.

In less-sure hands, this could have been a creepy debacle. But Heller, who first adapted the work for the stage, knows the material inside out, and with the Sundance Institute at her back, she has created an impeccably crafted film.

Writer/director [Marielle] Heller avoids the pitfalls of thematic darkness and adds a layer of lightness thanks to fantasy animations and dreamlike diary entries that enchant and entertain.

The Diary of a Teenage Girl is an honest, tender and daring debut for its director, with a brave performance from its young leading actress.

The overall pacing, tone and execution of the film is excellent.

It's honest, unapologetic, flawlessly performed, and a complex, unflinching look at female sexuality, which is no different in 2015 than it was in 1976.

Personal, daring, and with much to say, here's hoping DoaTG can become a trailblazer for female-voiced coming-of-age tales in a genre in which they remain badly under-represented.

Audience Reviews for The Diary Of A Teenage Girl

Bold, direct and taking its teenage protagonist seriously through good and decisions, this is a refreshingly different take on a coming of age story. The acting is top notch, especially Powley creates a very unique character: Prudes will have a hard time with every second scene here, but everyone with a wild teenage hood or an open mind will certainly appreciate such an unusual look at what growing up looks like.

Familiar coming of age story with more cringeable moments than the usual and a few wtf's. I liked the art parts and though some of it was slightly disturbing, it was well done.

Based off the novel of the same name, written by Phoebe Gloeckner, "The Diary of a Teenage Girl" is a very offbeat indie film about an 18-year-old girl who loses her virginity to her mother's new boyfriend. If that already sounds hard to watch for you, then I can tell you right now, this film is absolutely not for you. There are times where even the biggest of cinema fans may feel slightly awkward while viewing this picture. This film follows Minnie, who is an extreme introvert who will take on any situation as it presents itself. As she has very virginity stripped away, she continues to do so, becoming the school slut and following a path that pretty much very viewer will be against. Having a plot like that is very ballsy, as there is really no levity here. Is this a good film? Yes it is, but I found myself almost disliking it more than actually enjoying what was being presented to me. At a mere 102 minutes, I found myself checking my watch many times, as the film dives too far into sexuality to really grasp what this character is going through. There are many times (although Bel Powley does a great job of portraying her) that Minnie becomes very whiny and annoying. Again, this has nothing to do with the portrayal of the character, but more of the character herself. I found myself disliking every time she was on screen, which is 95% of the film. Due to the fact that this film feels very gross and drab, the simple camerawork and subtle visuals were really what stood out to me. Having her thoughts told through animations around her was very unique and that was easily my favorite part about this film. I understand that many girls have probably gone through a phase like this, and few have probably even gone this far or further, but for this particular character, I did not buy the arc she went through, because it felt incomplete and that she still has a very dark/sexual future ahead of her. With a very abrupt ending that leaves you wishing you had more, even though I did not want to see anymore, "The Diary of a Teenage Girl" is a very uncomfortable film to watch, but a very well-made one. This film may have not been my cup of tea, but I found myself believing the actions of Monroe (Minnie's mothers boyfriend) to be the most realistic, even though he is easily one of the sleaziest characters in the film. Kristen Wiig delivers a surprisingly great performance, but aside from shock value, her character does not do much here. In the end, I found myself admiring this film the entire way through, but it is very uncomfortable to sit through. With interesting visuals, a great cast, and a plot that definitely does what it sets out to do, "The Diary of a Teenage Girl" is solid filmmaking, but nothing more in my opinion.

In a culture obsessed with sex (and in handwringing denial of that obsession) (and particularly with young women) comes a solid look at one of the main underpinnings of America: a girl growing up in the middle of all that hoopla. Just an unflinching and eye-opening look from start to finish. And I did NOT want to watch, fearful of yet another of the myriad chick flicks populating the landscape: I was wrong. This is about our culture, our expectations, our humanity, yet seen through the eyes of a young woman coming of age. A step that had to be taken in the liberation of mankind from itself.

The Diary Of A Teenage Girl Quotes