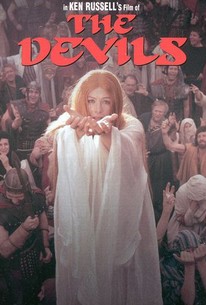 Critics Consensus: Grimly stylish, Ken Russell's baroque opus is both provocative and persuasive in its contention that the greatest blasphemy is the leveraging of faith for power.

Critics Consensus: Grimly stylish, Ken Russell's baroque opus is both provocative and persuasive in its contention that the greatest blasphemy is the leveraging of faith for power.

Critic Consensus: Grimly stylish, Ken Russell's baroque opus is both provocative and persuasive in its contention that the greatest blasphemy is the leveraging of faith for power.

The Devils was the Ken Russell film version of the controversial play by John Whiting. The story, based on Aldous Huxley's The Devils of Loudun, concerns controversial 17th century French priest Urbain Grandier, whose radical political and religious notions and profligate sex life earn him many enemies. When a group of nuns appears to have been "bewitched" by Grandier, his rivals feed on the resulting mass hysteria, using this incident as an excuse to have the priest arrested. Refusing to confess to being in league with Satan and to renounce his "heretical" views, Grandier undergoes appalling tortures, and is finally burned at the stake. Vanessa Redgrave co-stars as the head nun. Due to censorship issues in virtually every country in which The Devils has been released, running times vary greatly.

Vanessa Redgrave
as Mother Joan of the Angels

Dudley Sutton
as the Baron

Doremy Vernon
as Nun
View All

News & Interviews for The Devils

View All The Devils News

Critic Reviews for The Devils

What is quite certain is that Russell has been true to himself as never before and that in doing so, he will irritate, excite, bore and outrage more film-goers than ever before.

What I find such a pity is that Russell should apparently so distrust his own skill as a mesmerising story-teller.

Even more than The Music Lovers, The Devils reveals an infantile compulsion to shock and repel, cost what it will.

The truly provocative -- some might even say blasphemous -- part of the film is its assertion that, even while preaching their rhetoric of sin and salvation, nuns and priests and cardinals are only human, and humans are nothing but animals.

It is like a lunatic opera, an attempt to make a furious poem out of frenzy. Russell's flamboyant theatricality and his interest in the perverse have been too much imposed on his other films; but here, style and subject are perfectly matched.

About facts at any rate, and as cinematic reconstructions go, The Devils seems to be pretty accurate. But it is startlingly unsuccessful in moving its audience.

'The Devils' is a benchmark of transgression and profane cinema, a hidden jewel of the genre. [Full Review in Spanish]

Despite its superb acting, gratuitous excesses turn this short baroque opera into a simple comic opera. [Full Review in Spanish]

It's scandalous in that it talks about things people generally aren't prepared for and it does so with the sharp edge of satire. After seeing the film, you'll know full well who, in Ken Russell's supposition, the real Devils are.

It's an experience which pulsates and perverts, especially in those glorious moments when Russell slaps the sacred directly in its frescoed face... In this brilliant film, nothing is safe: not God, not Satan, not man, not their collective meaning.

Weird, disarmingly funny, and stuffed to the gills with inspired visuals and intense framing from [director of photograph] David Watkin, The Devils is a masterpiece.

Audience Reviews for The Devils

Ken Russell's work here is deliberately thought-provoking as a priest (Reed) living on the edge of popular thought, and stubbornly argumentative with the powers-that-be, is therefore expeditiously accused of worshipping Satan. Hysteria follows. The finger pointed at modern society is strong with this one. Don't say I didn't warn you. Parental guidance suggested. For your parents, too.

For a while, the impression one gets is that Russell is not interested in discussing insanity (or its nature) but just to show it - bare naked - in a purely exploitative, surrealistic way; which is true, until everything moves so confidently towards an apotheotic display of mad depravity.

One of my all time favorite movies, sadly missing a proper DVD release with the full uncut version to this day. Seems the movie keeps hitting nerves after 40 years. Oliver Reed gives the performance of a lifetime.

Here's a film that deserves a far more detailed write-up than I am going to give it. Easily the best film I saw last year. Stellar performances keep your eyes positively glued to the screen. Wild, fiery subject matter for those willing to open themselves up to it. Well worth seeking out the original cut of the film, with the "Rape of Christ" sequence in it. This almost got an official DVD release a while back but someone applied the brakes. Lets hope cooler heads prevail and let this amazing film be seen by a greater audience.