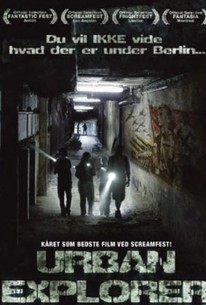 Four brave urban explorers descend into the crumbling underground tunnels beneath Berlin, and realize they may never make it out alive after encountering a mysterious stranger in this subterranean nail-biter from director Andy Fetscher. Six stories beneath the streets of Berlin, a complex maze of 25,000 tunnels house untold Nazi secrets. Determined to explore these winding caverns despite the fact that they have been purposely sealed off for the protection of the public, four young adventurers arrive at an inner city club to meet their guide, and explore the remnants of a dark chapter in history. But from the moment the group enters the tunnels, the mood underground turns ominous. In an attempt to discourage neo-Nazis from staking their claim on the city's shame, the German government closed off the tunnels permanently -- or so they thought. Now the deeper the explorers venture, the more lost and confused they become. Just when it begins to seem as if they will never find a way out, however, an outwardly benevolent old man rescues them, and tends to their wounds. Unfortunately for the unsuspecting trailblazers their savior is not who he appears to be, and by the time they realize this, it may already be too late. ~ Jason Buchanan, Rovi

Critic Reviews for The Depraved

If Fetscher pushed his best themes further it would've complimented the movie. Instead we're left with a by-the-numbers plot, garnished with juicy themes around the edges.

while Urban Explorer may be filled with the sort of troglodytic torture, monstrous madness and bloody death familiar from many other genre films, at heart it is a 'foundation' myth for the city in, around and under which it was shot.

Audience Reviews for The Depraved

There are no featured audience reviews yet. Click the link below to see what others say about The Depraved!