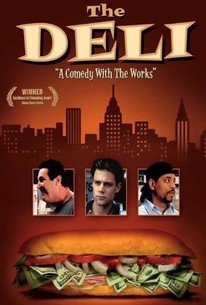 With its plenitude of shady figures, eccentrics and crooks, this tale of a deeply-indebted, gambling-addicted delicatessen owner evokes the stories of Damon Runyon. Almost all of Johnny's patrons know about his problem, but they let it slide. Even the bill collectors, impressed by the fast-talking deli man's charm, are willing to forgive him. However, there is one person he cannot sway and that is his domineering mother, a woman more terrifying to him than any bookmaker's thugs. He knows the jig is up with her when the daily lottery winner is announced and the number is the one his mother had been giving him money to play every week for the past few years. But unbeknownst to her, selfish Johnny has used her weekly ten spot to make his own bets. Afraid of telling her, Johnny makes one last desperate high-stakes wager to cover his debt to his mom.

Ice-T
as Phil the Meat Man

Joey Kola
as The Lonely Guy

Jack A. O'Connell
as Jimmy the Newsman

Laura Caspi
as Girl at BBQ

Molly Schulman
as Kid at BBQ
View All

Critic Reviews for The Deli

This movie tells us to beware of rappers in cinema. Thanks for the warning, Ice-T.

Audience Reviews for The Deli

There are no featured audience reviews yet. Click the link below to see what others say about The Deli!