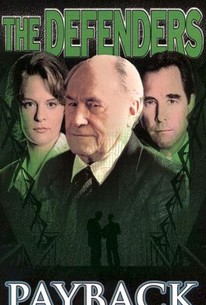 Based on a popular television courtroom drama series (1961-65), this Showtime made-for-cable movie returns esteemed actor E.G. Marshall to the role of brilliant lawyer Lawrence Preston. In this episode, Preston teams up with his son, professor of law Don Preston (Beau Bridges) and his niece M. J. (Martha Plimpton) to prove that Michael Lane (John Larroquette) did not murder his daughter's rapist. Unfortunately, Lane, who is glad that the brute is dead, refuses to do anything to help them defend him.

Mark Blum
as Jackson
View All

Critic Reviews for The Defenders: Payback

There are no critic reviews yet for The Defenders: Payback. Keep checking Rotten Tomatoes for updates!

There are no featured reviews for The Defenders: Payback at this time.