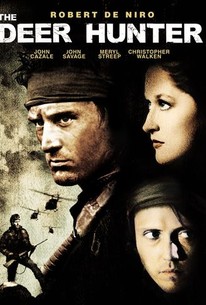 Critics Consensus: Its greatness is blunted by its length and one-sided point of view, but the film's weaknesses are overpowered by Michael Cimino's sympathetic direction and a series of heartbreaking performances from Robert De Niro, Meryl Streep, and Christopher Walken.

Critics Consensus: Its greatness is blunted by its length and one-sided point of view, but the film's weaknesses are overpowered by Michael Cimino's sympathetic direction and a series of heartbreaking performances from Robert De Niro, Meryl Streep, and Christopher Walken.

Critic Consensus: Its greatness is blunted by its length and one-sided point of view, but the film's weaknesses are overpowered by Michael Cimino's sympathetic direction and a series of heartbreaking performances from Robert De Niro, Meryl Streep, and Christopher Walken.

The Deer Hunter moves from the steel mills outside of Pittsburgh to the mountains of Pennsylvania to the jungles of Vietnam as it explores the upheaval faced by a tight-knit group of Russian Americans when three of their number enlist to serve in Vietnam.

Chuck Aspergren
as Axel
View All

News & Interviews for The Deer Hunter

View All The Deer Hunter News

Critic Reviews for The Deer Hunter

The wayward, maddening screenplay succeeds only in working up a gruesome melodramatic later -- hardly the catharsis promised by a bold treatment of the wounds of our most divisive war.

To my mind, The Deer Hunter is a major achievement in American movies. And I fervently hope that the American public won't vote me wrong.

While it's fair to argue that The Deer Hunter contains moments of brilliance, the film as a whole is undone by its length.

The movie won five Oscars and, if anything, improves with age.

It has no more moral intelligence than the Clint Eastwood action pictures, yet it's an astonishing piece of work, an uneasy mixture of violent pulp and grandiosity, with an enraptured view of common life -- poetry of the commonplace.

In trying to measure the devastating impact of Vietnam on the lives of three American soldiers, Cimino brings home the true horror of that senseless conflict in a way that the 6 O'Clock News never could.

The depiction of Vietnam, and then the subsequent aftermath in the third act of the film, is more potent and visceral because we feel the impact of the war on an entire community, not just on the three men we follow there.

...certainly a bit long and could use some trimming.

[The Deer Hunter] is the most ambitious attempt to grapple with the subject that has yet been released. Its vision -- an effort to weave the inferno of Vietnam into the homespun texture of American life -- is effectively realized and savagely gripping.

The director, Michael Cimino, on his second movie, has an incredible, prodigal gift for making movies, knowing that editing is the shape and life behind film.

Audience Reviews for The Deer Hunter

Cimino is a great director who takes his time in a long, careful first act before throwing his characters inside a terrifically tense, gut-wrenching second act that makes us deeply consider the tragic effects of war on veterans, with Walken and De Niro in spectacular performances.

Whilst its running length may annoy some, "The Deer Hunter" and Michael Cimino provides viewers with the most gut-wrenching and harrowing examination of the Vietnam War, and most importantly its affects on the lives of individuals. Set across many years, the film is split into very defined sections or three acts, with one hour given over to the characters and their normal lives back in the US, the second to the war in Vietnam, and the third to the years after the war. After struggling for funding for the three hour epic screenplay, a British studio, EMI, finally got the film rolling and the cast together for this brutal war film. The film tells the story of three men, and their friends, who take part in the Vietnam war. After one is married, Steven, played as like all the cast beautifully by John Savage, the other two, one a hunter of deer, Robert De Niro, and the other Christopher Walken, they leave for Vietnam and the film follows the war itself and the after effects. Whilst the screenplay and film itself combine to make a long film, it's well worth the wait. The picture itself is slow, the characters slow moving, and the action steady and events slow one by one. However amongst the slowness of the film, every member of the cast gives a slow but beautiful performance. Robert De Niro is riveting as the leading member of the gang of three, leading the film in the direction the director set out to do, and capturing the spirit of his horrified and somewhat soul rotted character perfectly. But each member of the cast performs their role wonderfully too, with John Savage's drained character of Steven, reflecting his injuries, and Christopher Walken's sunken and out of reality face and feel. The supporting cast also give fantastic performances, with Meryl Streep as Linda, in one of her finest roles, and John Cazale in his last ever film role, and perhaps his most provoking one. The action scenes themselves are not particularly special, but the Russian roulette scenes are what really stand out, with the intensity of the actors and set, stretching across, through the screen, onto any viewer. In the Russian roulette scenes, Cimino shows us his best, as we are literally taken into the middle of the games with the other characters and flung headfirst into uncertainty, panic and desperation. But the real achievement of this film, is the study in human emotion and character, when such horrors of war are flung upon them, and how it affects not only them, but the people they know and love. At the 1979 Oscars, it was filled with controversy and its portrayal of the war, which had only ended a few years earlier, but in the end, the film's terrible, horrific study of human individual lives following the Vietnam war, will ensure its status as a classic war film and classic motion picture.

The Deer Hunter, could sometimes, present boring scenes, but the tension in this dramatic film, with a great Michael Cimino's direction, original story and unforgettable actings, make this war drama, one of the best movies about the Vietnam war.