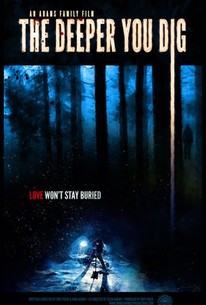 The Deeper You Dig Videos

Ivy and Echo are not your typical mother-daughter team. Ivy, once an intuitive psychic, makes an easy buck as a bogus tarot card reader; 14-year-old Echo likes old-timey music, hunting, and black lipstick. When reclusive Kurt moves down the road to restore an abandoned farmhouse, an accident leads to Echo's murder, and suddenly three lives collide in mysterious and wicked ways. Kurt assumes he can hide his secret under the ground. But Echo burrows into his head until he can feel her in his bones. As she haunts his every move, trying to reach her mother from beyond, Ivy must dig deep to see the signs and prove that love won't stay buried.

Critic Reviews for The Deeper You Dig

One of the more striking and effective horror pictures of recent years.

A sterling example of a flesh-and-blood DIY indie that does not play by any rules.

A nicely economical tale of supernatural vengeance that benefits from its small scale and lived-in atmospherics.

A fine example of how shrewd, ambitious filmmakers can leverage a simple scenario into a strange, haunting little story with minimal resources.

Even if it's a bit insubstantial in some regards, "The Deeper You Dig" is cool, haunting horror with a unique spin and approach.

The Deeper You Dig depicts the existential struggle of life, death, and rebirth in the aftermath of violent crime.

It explodes clichés, keeps you guessing, and takes advantage of the clear trust among the actors to create an unusual and compelling family dynamic.

a stylish looking, well acted film that examines the strong bond between a mother and daughter both before and after death with plenty of creep factor for genre buffs.

There is a deft hand (or three) both behind and in front of the camera that melds the supernatural tale with the mother-daughter story in an intriguing way.

The beautifully shot slow-burner keeps the audience engaged with good performances by the Adams family, especially Toby Poser as the concerned mother and former medium.

The Deeper You Dig may be a small production, but everything in it feels aspirational, so much bigger and heartfelt and horrifying than can be expected.

There are no featured reviews for The Deeper You Dig at this time.

The Deeper You Dig Quotes