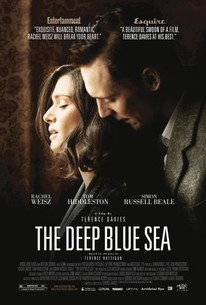 Master chronicler of post-War England, Terence Davies directs Rachel Weisz as a woman whose overpowering love threatens her well-being and alienates the men in her life. In a deeply vulnerable performance, Rachel Weisz plays Hester Collyer, the wife of an upper-class judge (Simon Russell Beale) and a free spirit trapped in a passionless marriage. Her encounter with Freddie Page (Tom Hiddleston), a troubled former Royal Air Force pilot, throws her life in turmoil, as their erotic relationship leaves her emotionally stranded and physically isolated. The film is an adaptation of British playwright Terence Rattigan's 1952 play, featuring one of the greatest roles for an actress in modern theatre. -- (C) Music Box Films

Now a new film of the play appears, adapted and directed by Terence Davies with Rachel Weisz in that stellar [Hester Collyer] role and with Rattigan's work in a freshening treatment.

The movie is an exquisite period piece, slow and dank, and unduly persuaded that it's rendering a classic.

[Weisz'] performance that transforms her from actress to movie star.

The best parts of the movie, like the scene with William's mother, involve isolated set pieces in which Weisz interacts with another actor.

A story of passion and its aftermath; of what happens when an unhappy woman goes chasing after something shiny, only to find how quickly it fades.

Davies doesn't provide stylish counterweights to the heavy drama. Any story that starts with a woman writing a suicide note is cheating us of an honest investment in the outcome.

The perfect example of a stereotypical British film. It is serious, sad, slow, and filled with great acting.

A haunting and intelligently drawn love story that lingers in the memory like a wisp of smoke caught in a sunbeam.

With muted colours and dreamlike compositions, it's very much a mood piece, as if the story is being filtered through the smoky prism of the director's half-remembered childhood. A film for grown-ups, and highly recommended.

Davies has also fashioned one of the great films about building a profound macro-drama out of a single event or day.

Unfortunately, once everyone's role is explained the film has nowhere to go.

The Deep Blue Sea is an intricate, subtle and exquisite looking chamber soap opera, set in post war London of 1950. The spare and brilliant adaptation of one of Britain's greatest 20th century playwrights, Terence Rattigan, is brought to life and very much into film language by another Terence (Davies) a filmmaker's filmmaker. Davies has only produced a handful of films in the last twenty years, and this may be his best. Please be warned this film is exceptionally slow moving, with gaping, meaningful pauses you could drive a panzer division through. Since all those pauses are fraught with meaning and precise and deeply felt acting, I was not bored. If you like your movies full of dialogue and action, you might asleep before act one closes. It also jumps back and forth in time, and you need to be alert to figure out where you are in the story. Rachel Weisz plays an lady married to a much older successful judge, who throws away her whole life for love, (or really for good sex) with a younger, dumber war hero (Tom Hiddleston, the bad guy Loki of The Avengers), who is more or less the opposite of the cultured and thoughtful man to whom she is married (Simon Russell Beale). These three actors do wonderful internal work that is full of subtext and deep emotion. They are all perfect, but Weisz is a standout. Hester is a strong, misguided woman trying to find herself in a pre-feminist world and her performance resonates very deeply and hauntingly. The mystery is why a woman (Hester) would throw away a comfortable, cultured life for unrequited love (of which her eyes are fully open) to a man who may be good in bed, but is in no other way worth it. Her attempted suicide is her first reaction. The question is never answered, but the tragic end of the story, (a failed suicide attempt) still leaves a hopeful crack open in the the door for Hester, who has lost everything, to find a fulfilling life for herself. The selling point for me, is the stunning looking film itself. Every shot is a glowing work of art, using the drab post war London as a backdrop. There's a long tracking shot during a flashback during the London blitz, that as stunning and moving a moment in any film I've seen this year. The huddled, frightened Londoners cheer themselves up by joining in song. Later, in the present, some drab looking pub goers do likewise singing the Jo Stafford version of "You Belong to Me" under muted and warm light. Of course that song is a fitting subtext for the film.. The film has my highest recommendation, but don't rent it if you're feeling sleepy (or adulterous).

No, this isn't the Samuel Jackson shark movie. I wish it were, but it's not. Each year I try to watch as many award nominated movies as possible, and this is a Golden Globe nominee for Rachel Weisz's performance. She plays a woman who is depressed after leaving her husband after an affair with a Royal Air Force Pilot(Tom Hiddleson) in 1950 England. I had never heard of this movie, so went and read the plot and thought "hmm, that could be interesting!" Well, I was way off. This movie is a pretty big bore, with a lot of artsy silent type shots while classical music plays. Weisz's is good, but to me her performance is lost in movie that is more concerned with being pretentious than entertaining. I can see how some people will like this, and those people usually have a vast difference in movie taste than me. So if you don't agree with my reviews, then check it out I'm sure you'll enjoy it a lot!

Exceptional performance by Rachel Weisz but the film is heavy going.

A well-made, involving drama concerning a troubled, younger wife (Rachel Weisz) of a wealthy judge (Simon Russell Beale) caught in a sexless marriage, who has an affair with a former Royal Air Force pilot (Tom Hiddleston), due to her desire to experience physical pleasure. What gives this film more weight than your typical affair story is Rachel Weisz's phenomenal performance, where you care about her character despite her obvious flaws. Really, this film is all about Weisz, who shines in the moment even when the pace of the film threatens on glacial speed. It is a short, emotional movie that does not overstay its welcome, and it explores all of the angles, including Weicz's elder husband who is civil and understanding, but obviously very hurt and distressed. A good film that should be seen.