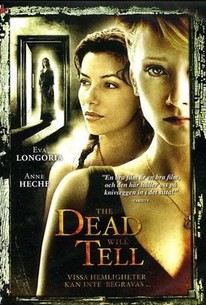 The Dead Will Tell Photos

The made-for-TV paranormal thriller The Dead Will Tell was based on a "true" story suggested by famed psychic James Van Praagh, who also shows up in a cameo role. When Emily Parker (Anne Heche) is given a very old engagement ring by her fiancé, Billy (Jonathan LaPaglia), she is suddenly haunted by visions of the woman to whom the ring previously belonged. It soon becomes painfully clear that the spectral woman was murdered, and that she is "reaching out" to Emily in hopes of trapping her killer. Adding extra layers of intrigue to the proceedings is the peculiar behavior of Billy's overprotective mother (Kathleen Quinlan). Other key players in the mystery are portrayed by Eva Longoria (Desperate Housewives), Christopher Guest, and, as the widower of the dead woman, Chris Sarandon. Filmed in New Orleans, The Dead Will Tell made its CBS network premiere on October 24, 2004.

Critic Reviews for The Dead Will Tell

There are no critic reviews yet for The Dead Will Tell. Keep checking Rotten Tomatoes for updates!

There are no featured reviews for The Dead Will Tell at this time.

The Dead Will Tell Quotes