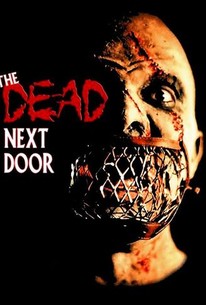 The Dead Next Door Photos

The feature debut of ultra-low-budget horror auteur J.R. Bookwalter, this fast-paced zombie mini-epic is very likely the most expensive movie ever shot on Super-8 film. Playing with the long-established mythos of George A. Romero's Living Dead trilogy, The Dead Next Door was produced with the help of many of the Evil Dead crew: financial backer Sam Raimi is credited as "Master Cylinder" and one of the characters is named after him; Evil Dead co-writer Scott Spiegel plays a role; and some character voices are dubbed by Bruce Campbell. The story centers on the members of the "Zombie Squad" -- an assault team trained in the hunting and extermination of the living dead -- and their mission to track down the scientists who developed a zombie-making virus and find the rumored antidote. Of the many lethal obstacles in their path, the deadliest comes in the form of a religious cult whose leader sees the zombie epidemic as a precursor of Armageddon -- and is hell-bent on expediting it. Very stylish for what is essentially an epic-scale home movie (and gushing with plentiful home-style gore effects), this remains Bookwalter's best effort and contains numerous witty homages to the Romero films which inspired it.

Critic Reviews for The Dead Next Door

writer/director/producer/actor JR Bookwalter's feature debut... is no less a labour of love than it is in love with its own generic antecedents.

Audience Reviews for The Dead Next Door

The Dead Next Door is a poorly constructed low-budget zombie film that just doesn't work. Shot on Super 8 mm film, the film right from the start has an amateur feel to it. This is a film that is supposed to be homage to all the Romero films. Although I admire the use of Super 8, and what they managed to accomplish with such a low-budget, this film has no real plot or no substance. This could have been a very good film, instead it fails and lacks anything to really peak a horror fan's interest. J.R Bookwalter's directing is sloppy and unfocused. The film just fails because it doesn't tell a consistent story. The film could have been a fine low-budget tribute if the script would have been better. Unfortunately, the film is bad due to stupid overdubbing to make it sound like Bruce Campbell and other horror icons are in the flick. Unfortunately it makes the film unbearable, and it's a chore to watch. The biggest problems with this film are the script, acting and directing. Although the film has great gore effects considering the budget, it's simply not worth seeing. The acting itself is horrible, cheesy and laughable and the script goes out all over the place. This is a poorly made that you can tell that no real effort went into making something good and watchable. The filmmakers went for the gore factor, and though impressive, it doesn't make this a good film. This was bad, and if you love a good zombie flick, pass up on this one, and watch something else. The Dead Next Door simply isn't worth watching.

A great zombie movie starring Evil Dead's Bruce Campbell. It's even pretty funny at times, but still it brings the blood and gore you want in a horror movie. I really enjoyed it, and I highly recommend it.

Zombie Movies are not exactly one of my pleasure but I like to watch if a good one is running or I get a recommendation. Widely regarded as the most expensive 8mm zombie film ever made, This is not true, but not a bad one.

If you don't like zombie movies, you'd be best off making sure that you never see The Dead Next Door...but if you do like zombie flicks, this might provide some amusement. While the film is never exceptional (even in the low budget zombie sub-genre), it does have some positive aspects, which pull it out of the truly abysmal. Despite it's more than obvious low budget, it's clear that the producers of this flick wanted to do some things with the genre that haven't been done before. Of course, by 1988; zombie films had pretty much been explored to the max, but fairly original ideas such as the religious cult that want the zombies protected and the thing with half-human, half-zombie give this film some things to call it's own. The plot is a straight Romero-rip off, and it sees the world being plagued by zombies. We follow a team of government agents calling themselves 'Zombie Squad', whose task it is to, basically, kill zombies. Their job is made more difficult by a cult of religious weirdo's, who strangely think that the zombie is worth saving... On the technical side, everything about this film is rubbish. The script is ridiculous, and little gems like "I'm a zombie now" show this. The acting matches the script, and once again is a load of rubbish. Someone called Pete Ferry takes the lead role, and does his best impression of Bruce Campbell. He's not the king of B-movies, but his performance does ensure that it's obvious that this movie isn't to be taken seriously. The closing credit of 'you have just witnessed the awesome talents of:' is a nice touch, and shows that the crew were only having a laugh while making this film. The special effects are gory and disgusting, but also very stupid and impossible to take seriously. Still, they beat lazy effects like those of Resident Evil (the movie) hands down. The way that a lot of the characters have been given horror director names, such as Raimi, shows that the makers are fans of this sort of film, and that fact might even be inspiring if this production wasn't so unprofessional. On the whole, there's no denying that this isn't very good; but on the other hand, it's a decent waste of time and there's definitely something here for zombie fans.

The Dead Next Door Quotes