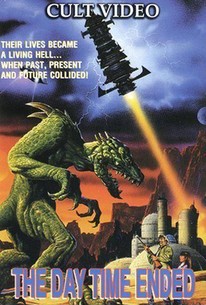 In this bargain basement sci-fi film Time Warp-The Day Time Ended, a family moves into their state-of-the-art solar-powered home in an isolated part of the desert to start a new peaceful life. Meanwhile, far away in deep space, three stars simultaneously explode, sending disruptive, time-bending shock waves through the cosmic void. These waves hit the house and soon some mighty bizarre things begin to happen, including a sudden resurgence of dinosaurs in their backyard, visitations from diminutive aliens, and a robot from outer space. The film is also titled Time Warp.

There are no critic reviews yet for The Day Time Ended. Keep checking Rotten Tomatoes for updates!

Nonsensical junk with some truly awful acting, weak special effects and no script to speak of. Davis made this just before Dallas rescued him from this sort of bottom of the barrel exercise. The film offers proof that an Oscar, in this case Dorothy Malone's, doesn't guarantee quality work in the future.

An eruption of solar flares opens a wormhole in time and space allowing shambling Claymation creatures from beyond to terrorize a family that lives out in the desert. A B-film that aspires to more ... and misses by just that much.