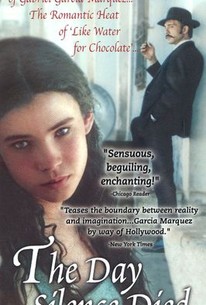 Italian director Paolo Agazzi spins this deft, witty fable about rural life in Bolivia. The film opens with a traveling actor being discovered making love to the wife of a local bigwig on stage. Years later, the bereaved big shot is so afraid that he is going to lose his gorgeous daughter Celeste (Maria Laura Garcia) the same way he lost his wife that he has literally chained her to the house. Meanwhile, local author Oscar (Gustavo Angarita) is fascinated with a newly-arrived stranger, Abelardo (Dario Grandinetti), who has brought with him an entire broadcast system. Soon the sleepy town has its first taste of the media. Later, as the radio broadcasts start to cause chaos, both Abelardo and Oscar fall for Celeste.

When you're not admiring the cinematography or the excellent score, you're kept smiling by the slightly off center inhabitants of Villaserena.

There are no featured reviews for The Day Silence Died at this time.