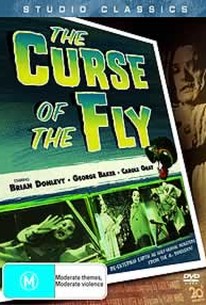 The Curse of the Fly Photos

This horror movie, the third and final entry in "The Fly" series, features a failed teleportation device, a mad scientist, a fugitive from a looney bin, and a closet full of mutants. The trouble begins again after a young woman escapes from a mental institution and ends up at the home of the Delambre family. There she finds the family leader continuing his experiments in using a machine to teleport people from one place to another. She also finds his handsome son whom she marries. After she discovers a closet filled with failed teleportation experiments, the police are notified. The crazed scientist tries to use his machine. Again it fails and all that remains of the mad inventor is a gooey blob. ~ Sandra Brennan, Rovi

Mia Anderson
as Nurse
View All

Critic Reviews for The Curse of the Fly

Audience Reviews for The Curse of the Fly

Tries to do something different, but it doesn't work. Very forgettable.

If you thought the Return of the Fly was bad, see this movie, it's worse. The story makes no sense and the characters don't either. Even if you liked Return of the Fly, skip this third movie. Price isn't even in this one, so what other reason is there to see it?

I wasn't too impressed by "Return of the Fly", but it still fascinated me! When I learnt that there was a third one, I was quite intrigued to see it. I just watched it for the first time on DVD, and I was quite impressed on how smart the story was, and even though there is no Human-Fly monster in it (which, to be honest, is a smart approach), I thought it was more clever to base the movie around the Delambre legacy, rather than focus on the whole "man gets gene-spliced with a fly" blah blah blah! To be honest, I was expecting something REALLY dreadfully cheesy, but surprisingly, I loved it! The visuals (especially, the opening credit sequence, very well thought up!), and the originality of it is superbly done! It's got the classic horror movie style down perfectly! True its not as frightening as say... Alien, but, for its time (1960s), the mutant make up and story are very well sorted! TOTALLY UNDERRATED!

Sequel to the old original The Fly. Standard mad scientist B-movie horror pic. The scientist who turned himself into a fly before is older now and has had his mutation under control with some chemical. He has two sons too, one who wants to get away from his father's research, and one who is taking after his father. Old creatures, new mutations, and several dead bodies all appear as the old lab equipment is fired back up. It's just not very good. I don't like these B-horror movies much.

The Curse of the Fly Quotes