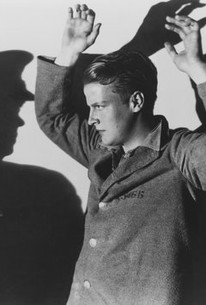 Howard Hawks' early sound prison melodrama, based on a play by Martin Flavin, already contains his stylistic signature of over-lapping dialogue -- a technique he would greatly expand upon in the next ten years. Walter Huston is district attorney Brady, who quickly convicts Robert Graham (Phillips Holmes) of murdering a man who was harassing his girlfriend. Brady is later made the warden of the prison where Robert is held. Brady tries to make friends with Robert, but Robert will have no dealings with the new warden. Nevertheless, Brady, who thinks Robert is a decent man who became embroiled in extraordinary circumstances, gives Robert a job as his chauffeur. As he drives with Brady's daughter Mary (Constance Cummings), the two fall in love. Meanwhile, things heat up back at the prison, where crazed killer Ned Galloway (Boris Karloff) kills the squealer Runch (Clark Marshall). Robert knows Ned killed Runch, but refuses to tell Brady. Brady reluctantly sends Robert to solitary confinement to get him to give up the murderer's name, but Robert holds out on him.

Critic Reviews for The Criminal Code

Granted that Howard Hawks's direction is for the most part intelligent and firm, there are occasional sequences which he spoils by extravagant ideas or by leaving too little to the imagination.

Prison melodrama is stuffy and uninventive, despite good cast.

Audience Reviews for The Criminal Code

The best thing about this movie was Boris Karloff.This was the 1st time I've ever seen him in a non horror role & He was truly creepy.I love old prison flicks so I was hoping for a good movie but it was just OK.Without Boris Karloff, It would've totally sucked