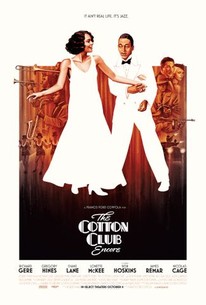 In this lavish, 1930s-era drama, Harlem's legendary Cotton Club becomes a hotbed of passion and violence as the lives and loves of entertainers and gangsters collide. Now, Francis Ford Coppola's extraordinary film is brought to vivid new life in The Cotton Club Encore. Featuring never-before-seen scenes and musical sequences that deepen and enrich the storylines, this remastered and beautifully restored version represents Coppola's fully realized vision of the film. Though the public's understanding of the film is an American crime drama centered around Richard Gere, Coppola meant for it to be a story of two main characters, one white and one black, navigating life in and around the Cotton Club with their families. However, back in 1984 during post-production, the film was condemned as too long, and according to some stakeholders as having "too many black people," and "too much tap dancing," Coppola was pressured to minimize Gregory Hines' character and lose many musical numbers, thus eroding the historical portrayal of what the performances at the Cotton Club shows were really like. Along with his team at American Zoetrope, Coppola set out to create an updated version that would more closely resemble the original intentions of the film. This new version of the film, shown only three times previously during the 2017 Telluride Film Festival, features additional scenes such as an extended Gregory Hines and Maurice Hines tap performance, Lonette McKee's brilliant rendition of Ethel Waters' "Stormy Weather," Coppola's originally envisioned ending, and more.

The Indie Fresh List: A Breaking Bad Movie and a Best Picture Hopeful Lead a Pack of Strong Offerings

Coppola's new version does everyone on screen a favor.

Coppola can't avoid a dash of mythology when filming brutal killings, but he also looks grimly at the Mob's role in popular artistry-and in enforcing racial barriers.

In the end, there's a point about black struggle alongside white dominance in "The Cotton Club Encore" that Coppola can't get quite right because, ultimately, atmosphere won out over emotion.

All right, it's what the world should have seen. Does that make it, 35 years later, worth seeing? No and yes.

Though it's still not entirely successful, I'm glad this version exists. Coppola's restoration has turned a hot mess into a noble failure.

This is a gift to cinephiles everywhere from deep in the cellar and we're all lucky to get a sip.

Yes, the film is still a bit of a mess here and there and probably always will be. However, The Cotton Club Encore takes it and elevates it from the rank of fascinating misfire to unqualified success.

Encore is a social-consciousness musical, brought back to challenge an era in which social consciousness itself isn't enough.

Gorgeously shot, art directed and costumed, the visuals were strong but the storytelling was not clear. Filmmaker Francis Ford Coppola has released a 139-minute director's cut, and his revisions finally do justice to the script.

Might also be called The Cotton Club Transformed, because this cut makes a film that felt like a failure into one of Coppola's very best pictures. This movie is a feast with all the trimmings, and then some.

There are no featured reviews for The Cotton Club Encore at this time.