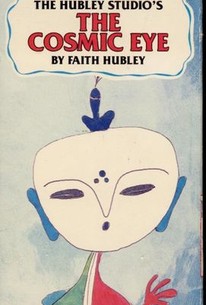 Animation veteran Faith Hubley worked solo for the first time since her husband's death in 1977 to oversee the feature-length cartoon The Cosmic Eye. The film concentrates on nothing less than the evolution of the earth, as seen through the eyes of three ultracool jazz musicians. Newly filmed material is blended with earlier Hubley projects to come up with an immensely satisfying unified whole. The animation is brilliantly complemented by the voicework (and musical contributions) of Dizzy Gillespie as the head musician, and by the soothing tones of Jean Stapleton as the humanized Earth. The film's overall message of peace, tolerance and conservation is never offered in the sledgehammer fashion of say, TV's Captain Planet. Completed in 1985, The Cosmic Eye was distributed on a limited basis the following year.

Linda Atkinson
as The Musicians

Sam Hubley
as The Musicians

Critic Reviews for The Cosmic Eye

There are no critic reviews yet for The Cosmic Eye. Keep checking Rotten Tomatoes for updates!

Audience Reviews for The Cosmic Eye

There are no featured audience reviews yet. Click the link below to see what others say about The Cosmic Eye!