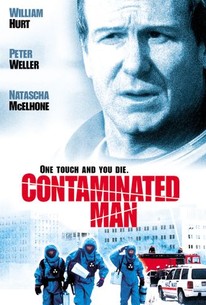 In this science fiction thriller, David Whitman (William Hurt) is a chemist who lost his wife and child in a freak accident and is trying to rebuild his life on his own. While doing research, Whitman discovers a series of mysterious deaths that seem to follow in the path of Joseph Mueller (Peter Weller), a seemingly ordinary man who works as a security guard. Unknown to Mueller, his body carries a strange contaminant that's deadly to many people, and Whitman is desperate to find Mueller and stop him before he can cause more deaths. But he discovers there's more to Mueller's story than he ever imagined. The Contaminated Man also stars Michael Brandon and Natascha McElhone.

Critic Reviews for The Contaminated Man

You have to give Contaminated Man credit for laying its cards on the table: as you might have guessed from the title, it is indeed about a contaminated man.

Audience Reviews for The Contaminated Man

Cool ending, but honestly, most of this movie is pretty boring, especially if you've seen this year's pandemic thriller Contagion...now there's a good virus movie.