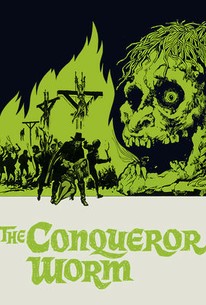 A corrupt opportunist commits brutal crimes in the name of God and country in this atmospheric period horror tale. In 17th century England, as a people's uprising threatens Lord Cromwell's rule, superstition still rules the land, and the Royalists use this to their advantage by inaugurating a reign of terror in the name of wiping out alleged witches and agents of the dark arts. Matthew Hopkins (Vincent Price) has been appointed "witchfinder" by Puritan Royalists, and with the help of his thuggish assistant Stearne (Robert Russell), Hopkins travels from town to town, brutally interrogating those accused of witchcraft and using fire, drowning, and torture to extract "confessions" from the accused. Of course, Hopkins' opinions can be swayed with money and other considerations, and when Father Lowes (Rupert Davies), a priest whose sympathies do not lie with the Royalists, is arrested and tortured by Hopkins and Stearne, his devoted niece Sarah (Hilary Dwyer) is able to stay his punishment by sleeping with Hopkins. Sarah, however, is engaged to marry Marshall (Ian Ogilvy), a soldier in Cromwell's army, and once Marshall learns that the woman he loves has been seduced by Hopkins -- and raped by Stearne -- he becomes determined to expose the witchfinder and punish him for his misdeeds. Witchfinder General was released in the United States by American International Pictures, who in addition to arranging for Vincent Price to play Matthew Hopkins, changed the North American title to The Conqueror Worm, after a poem by Edgar Allan Poe which was read over the credits by Price, though the story bears no real relation to Poe's work. ~ Mark Deming, Rovi

Sally Douglas
as Girl at Inn

It remains contemporary, and even frightening, in its evocation of cynical Puritanism and mass deception.

Vincent Price has a good time as a materialistic witch-hunter and woman-disfigurer and dismemberer, and the audience at the dark, ornate New Amsterdam seemed to have a good time as well.

Visually, the theme is beautifully supported by Reeves' subtle use of colour, in which the delicate patchwork greens of the English countryside are shot through by the colours of death and decay as Matthew Hopkins prowls through it robed in black.

Price is superb as real-life witchhunter Matthew Hopkins, and writer-director Michael Reeves pulls no punches with this absorbing material.

A film about the terrifying combination of sadism and power.

With no supernatural elements to speak of, it is as much an historical drama as a horror film.

This is not the kind of horror that comes from cobwebs and creaky doors. Its horrors are all too human and impossible to cast off with a simple fade out.

It's an interesting indictment of blind piousness, but it's not much of a scare film for Halloween time.

Certainly not for the squeamish, but for others it's a surprisingly well realized study of violence.

Vincent Price embodies with perfection the horrors of religious bigotry (a subject that is still not outdated), but the strength and brutality of the story get a bit diluted by its lack of a clearer direction and people who keep running around back and forth searching for each other.

In spite of Mr. Price's noteworthy performance, Witchfinder General is at best a second-rate production. The story is conceptually dark, the script is graphically brutal and the characters are painfully one-dimensional.

When it comes to the MGM Midnite Movies, I've yet to find a bad one, that is until I watched this film, maybe that's why its sold as a single rather then a double as most MGM movies are Double Features. Anyway I don't think Vincent Price enjoyed making the film as it just didn't have that Vincent Price Flair to it. Movie is about a self appointed man who with the help of others goes town to town to burn witches, and gets paid a pretty good price for doing it. But in one town he picked the wrong girl to mess with as her husband is out for revenge, Sure this billed as the second feature at a drive in during its big screen showing. Just lacked that Vincent Price feeling. 2 Stars

I have a copy of Witchfinder General from many years ago. Recently, whilst re-organising my collection, I happened upon it and watched it once more. This film still manages to induce general feelings of horror on account of its violence, even though it is not really a 'horror' film as such. Watch it for its superb cinematography which lends it an appearance of freshness that belies its 35 years. It still looks as if it could have been made yesterday. Some of the more violent scenes will make you squirm. The cruelty of the period portrayed can only be imagined and the cheapness of life comes across as truly shocking. Vincent Price is excellent as Hopkins (though maybe a bit 'mature' to portray him, since he was witchfinding in his late twenties and died in his early thirties). To think that this evil man really existed and operated unchecked for several years leaves one cold. A minor masterpiece that all lovers of the macabre should enjoy.