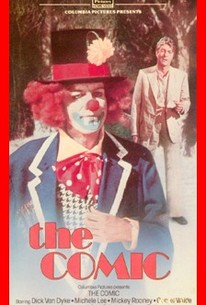 Carl Reiner directed and co-wrote this comedy-drama which tells the tale of a silent screen comedian whose talent doesn't quite outstrip his knack for self-sabotage. Billy Bright (Dick Van Dyke) narrates the story from his coffin, as he looks back on his life and career during his shabby funeral. In the early 1920s, vaudeville comic Bright goes to California to break into the movies, making a splash as he steals the show in his first short subject; he also steals Mary Gibson (Michele Lee), the leading lady, away from his director, Frank Powers (Cornel Wilde). Billy soon becomes one of the top funnymen in Hollywood after a series of successful two-reelers, and launches his own production company the same day he weds Gibson. But as Bright's star rises, his worst qualities come to the surface; he becomes an arrogant alcoholic who can't stay faithful to his wife, and while his first feature film, Forget Me Not, is a major success, his career quickly goes into a tailspin, and with the arrival of the talkies Bright is a has-been. In the 1960s, with a revival of interest in silent films, Bright is able to make a few bucks appearing in television commercials, but it doesn't take much success for his bad habits to take hold again. Reiner and Van Dyke drew inspiration from the onscreen work and off-screen lives of several silent-era funnymen for the character of Billy Bright, most notably Stan Laurel, Harry Langdon and Buster Keaton; the film also features a fine supporting performance from Mickey Rooney as Billy's faithful friend and sidekick, Cockeye.

Steve Allen
as Himself

Critic Reviews for The Comic

It isn't a good movie but it is often an interesting one, and it is full of lovely people.

There are some good hearty laughs in the film and there are some genuine moments of pathos yet outwardly they never seem to blend smoothly.

It's the kind of pic that you wanted to be better than it turned out, nevertheless even if it lets you down there's enough that's fascinating to keep you tuned in.

Custard mixes with arsenic in Reiner's bright meditation on slapstick

It's hard not to admire the film for its peculiar tone.

Audience Reviews for The Comic

There are no featured audience reviews yet. Click the link below to see what others say about The Comic!