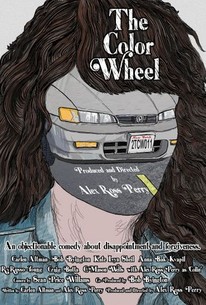 Critics Consensus: The Color Wheel takes audiences along for a darkly entertaining ride, getting a surprising amount of mileage from utterly unlikable central characters along the way.

Critics Consensus: The Color Wheel takes audiences along for a darkly entertaining ride, getting a surprising amount of mileage from utterly unlikable central characters along the way.

Critic Consensus: The Color Wheel takes audiences along for a darkly entertaining ride, getting a surprising amount of mileage from utterly unlikable central characters along the way.

The Color Wheel is the story of JR, an increasingly transient aspiring news-anchor, as she forces her disappointing younger brother Colin to embark on a road trip to move her belongings out of her professor-turned-lover's apartment. Problem is, these grown up kids do not get along, and are both too obnoxious to know better. Chaos and calamity are not far behind her beat up Honda Accord. Too bad that nobody else in the world can stand either of them. Not Colin's neglectful girlfriend, nor JR's former high school friends, nor strangers they clash with at pretty much every step of their hopeless and increasingly infuriating voyage of frustration, failure and jerks. It can only be a matter of time before JR and Colin arrive at the strangest and most unsettling of resolutions and put to rest their decades of animosity, half-baked sibling rivalry and endless bickering. -- (C) Official Site

News & Interviews for The Color Wheel

Critics Consensus: Battleship Is All Wet

View All The Color Wheel News

Critic Reviews for The Color Wheel

"The Color Wheel" partially recalls the scathing audacity of "The Graduate" some 45 years ago.

You might not "like" Perry's movie, but it's hard to deny the forensically assured sensibility at work.

Hard to swallow but impossible to ignore.

The most entertaining unpleasant film I've seen in years.

Alex Ross Perry has defined himself as one of the more exciting new directors with The Color Wheel.

Perry's film proves he's a unique voice in the American independent scene, and his latest film should give you something to smirk about.

Altman and Perry manage a teasing banter that's true to most brother-sister relationships, while also hinting at an additional edge.

"The Color Wheel" turns up more annoyance than laughter.

Alex Ross Perry's The Color Wheel begins as a scrappy, antagonistically funny road comedy and ends as something altogether stranger.

The Color Wheel requires a brand of empathy mainstream audiences are unaccustomed to, but rewards it with nearly revolutionary insight.

Audience Reviews for The Color Wheel

There are no featured audience reviews yet. Click the link below to see what others say about The Color Wheel!