The Color of Courage1998 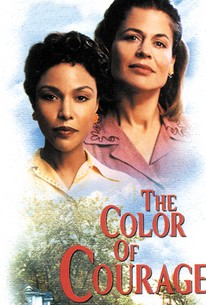 The Color of Courage Photos

Set in 1944 when racial segregation was still the norm in many American cities, this drama recounts the true tale of a black family that moves into an all-white neighborhood and the one white neighbor who befriends them. Mac McGhee (Roger Guenveur Smith) is a light-skinned black who for 12 years passed for white at a major Detroit newspaper. His colleagues figured he was of Latin decent. Mac's wife, the beautiful and sophisticated Minnie (Lynn Whitfield), possesses much darker skin. Mac radically alters his family's lives when he buys a house in an upper-class all-white neighborhood. Despite his wife's fears, Mac is determined to live there and moves his wife and two sons in at night. Neighbor Anna (Linda Hamilton) is the first to welcome the McGhees and brings them a homemade cake. Married to laborer Benjamin (Bruce Greenwood), a man too proud to have his wife work, Anna is well-aware that her family is not as financially well off as her other neighbors. It had taken her quite a while to save enough ration coupons to bake that cake. Minnie, does work, at the local post office. Anna and Minnie become friends, but Benjamin, also very conscious of his lower status in the neighborhood and wanting to improve his standing, succumbs to pressure from his other neighbors (who worry about lowered property values) to try to force the McGhees to live elsewhere. The Color of Courage played in the "American Discoveries" category of the 1998 Chicago Film Festival.

Critic Reviews for The Color of Courage

The drama shows how the hostile imagination can tarnish community and threaten family solidarity.

Audience Reviews for The Color of Courage

There are no featured audience reviews yet. Click the link below to see what others say about The Color of Courage!

The Color of Courage Quotes