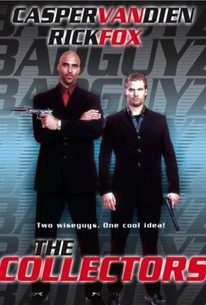 Two men on the wrong side of the law find their shifting alliances put them in grave danger in this crime drama. A.K. (Casper Van Dien) and Ray (Rick Fox) are a pair of strong-arm men collecting debts in New York City for a powerful gangster based in New Orleans. But they soon discover there is plenty of high-stakes action in New York, as they get sidetracked from their original assignment by a project of their own. As A.K. and Ray try to outrun Hackman (Daniel Pilon), a top New York Police Department detective, and Bailey (Catherine Oxenberg), a beautiful but ruthless cop with an agenda of her own, they find that they're also under the gun of their boss' other enforcers. Star Casper Van Dien and leading lady Catherine Oxenberg wed the same year The Collectors was released; they also starred in another film together that same year, The Omega Code.

Critic Reviews for The Collectors

How far can black humor go before it crosses the line into from mere tastelessness into abject inhumanity?

There are no featured reviews for The Collectors at this time.