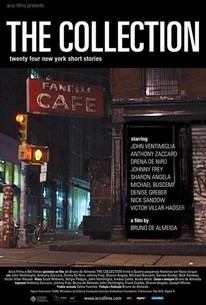 A feature film comprised of 24 short stories, The Collection was made by filmmaker Bruno de Almeida and a group of New York City actors and writers from May 2001 to December 2005 under a project called the DV Workshop. Shot with a digital camera and edited on a home computer, these films were shown on this website as they were being made, as a work in progress. The project came to it's conclusion on December 2005 with screenings in New York City and Lisbon.

Critic Reviews for The Collection

There are no critic reviews yet for The Collection. Keep checking Rotten Tomatoes for updates!

There are no featured reviews for The Collection at this time.