The Clown at Midnight1999 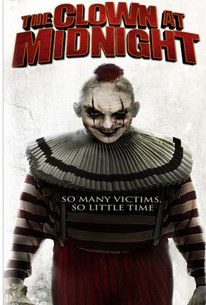 The Clown at Midnight Photos

In this atmospheric horror outing, an abandoned opera house has been donated to a high school, and theater instructor Ellen Gibby (Margot Kidder) organizes a team of student volunteers to restore the hall so it can be used for upcoming drama projects. However, the old theater holds disturbing memories for Kate (Sarah Lassez); her mother was a classical vocalist who was murdered 15 years ago in the opera house's dressing room after a performance of Pagliacci, appropriately enough by a stranger wearing the clown's costume. Since then, Kate has been haunted in her sleeping and waking hours by visions of the murder, and as Kate and her friends George (James Duval) and Monica (Tatyana Ali) work to bring the music hall back to its former glory, they find themselves stalked by the same murderous clown who killed Kate's mother. The Clown at Midnight also stars Christopher Plummer and Melissa Galianos.

Critic Reviews for The Clown at Midnight

If you hate movies where people with low-IQs are chased around and killed by demented bozos, avoid it at all costs!

Audience Reviews for The Clown at Midnight

Way better then I was expecting it to be.Take out the murder & put in Scooby,Shaggy,Thelma & Freddy & you'd have a perfect Scooby Doo movie

The Clown at Midnight Quotes