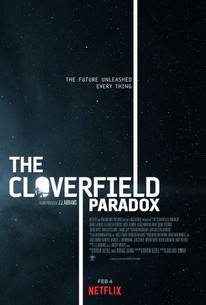 Critics Consensus: Brilliant casting is overshadowed by a muddled mix of genres and storylines that scratch more heads than sci-fi itches in The Cloverfield Paradox.

Critics Consensus: Brilliant casting is overshadowed by a muddled mix of genres and storylines that scratch more heads than sci-fi itches in The Cloverfield Paradox.

Critic Consensus: Brilliant casting is overshadowed by a muddled mix of genres and storylines that scratch more heads than sci-fi itches in The Cloverfield Paradox.

A group of scientific researchers on a space station attempt to harness a new energy source called the "God Particle," only to unleash something terrifying. Julius Onah (The Girl Is in Trouble) directed this sci-fi thriller, which stars Gugu Mbatha-Raw, David Oyelowo, Daniel Brühl, Elizabeth Debicki, Chris O'Dowd, and Zhang Ziyi.

News & Interviews for The Cloverfield Paradox

View All The Cloverfield Paradox News

Critic Reviews for The Cloverfield Paradox

One of the big problems with Paradox is that 85 percent of the film is explanation, leaving very little time for character development.

There are humanist bits and chunks of "Interstellar" and "Arrival," though in order to set up another chapter of this loosely assembled saga of woe, "The Cloverfield Paradox" eventually, dutifully gets around to a nonhuman adversary in close-up.

Its twists feel routine, its narrative spine limp and its conclusion especially rushed.

The fastest turnaround from must-see event to disappointing dud in history.

A kluge of bad science and worse science fiction clichés, it tries to be atmospheric and scary but succeeds only at being frustrating and tedious.

I'm still not sure what the paradox of the title is. Perhaps it refers to the impossibility of offloading a film to Netflix at the 11th hour, as Paramount has done, and still expecting it to be a hit.

A] fun, attractively shot sci-fi thriller that benefits from solid production value and a killer cast.

Despite its flaws, "The Cloverfield Paradox" does make for a fun space horror film, especially since you've likely already paid for Netflix this month.

Its lazy characters and the shallow personality of the story defines it until thew movie completely faints at the end. [Full Review in Spanish]

As a film in its own right The Cloverfield Paradox is a complicated mess.

The bouncing baby byproduct of a menage a trois between Event Horizon, Sunshine and Spaceballs, The Cloverfield Paradox is surreal, gross and borderline hilarious in the best ways.

Takes a wild premise, fills it with some truly absurd imagery, and turns it into a gripping sci-fi adventure that focuses on its most human elements.

Matthew Lucas
From the Front Row
View All Critic Reviews (143)

Audience Reviews for The Cloverfield Paradox

The crew of the Enterprise accidentally splits the space/time continuum, are transported to the other side of the galaxy and must now struggle to return ... or at least that's what this plays like: an episode of Star Trek. And not one of the better episodes. Kind of one of those so-so ones. Meh.

The fact that Cloverfield even became a loose franchise boggles my mind. Back in 2008 when the original film was released, I saw it as a cool alien invasion flick with secrets that it wanted to keep hidden. After rumors that a sequel would eventually arrive, I don't believe 10 Cloverfield Lane is what they were expecting. That being said, 10 Cloverfield Lane was a superior film in terms of tension, as well as the loose connection it made to the original movie. Now, without any real promotion, The Cloverfield Paradox has arrived on Netflix. Being the third instalment in this loose franchise, taking us to space is yet another thing that I don't think anyone expected before reading the synopsis. Nevertheless, a new sequel has arrived, and the biting questions everyone seems to be asking are whether or not it has a closer connection to the first and whether or not it's a good film. So, let's dive in and see if either of those things are true. The rest of this review isn't going to spoil anything about the movie, but since there hasn't been any real promotion, some people may consider the slightest plot detail to be a spoiler, so you've been warned. Aside from a few references throughout the first act of the film, this movie stands on its own as its own movie, just like 10 Cloverfield Lane did. That being said, there are some pretty obvious connections it makes as the movies go along, but I won't discuss those any further in this review. The Cloverfield Paradox follows a crew of scientists across space as they try to solve an entry crisis on Earth. Making a few mistakes during this process, they're sent to an alternate dimension and discover that strange things have begun to happen. That's the basic premise, and hearing that alone would've excited me enough to buy a ticket to this in theatres, but I can also see why it went straight to Netflix. Although 10 Cloverfield Lane was a very low-budget movie, pretty much taking place in just a couple rooms, this is very much in the same vein, but with a few solid special effects added in. The feel of this movie definitely feels smaller scale than even the original, which was made to feel cheap and realistic, so this is why I found Netflix to be the proper release. Setting that aside, I was pretty impressed by the performances here and the surprises that this film delivers are worth the wait. This film isn't going to win any awards, and quite frankly isn't nearly as good as the previous two instalments, but from comedic moments to genuinely questionable scenarios that constantly presented themselves, to vague references to what's happening on Earth, to interesting characters being thrown into the mix halfway through the runtime, I found myself enjoying this movie, for the most part. It wasn't too long and kept up a nice pace, even though the plot points felt very, very familiar. Many people will be frustrated that it's not a direct sequel to either of the previous films, and while I'm okay with it not being that way, I also found myself puzzled as to why the story felt so distant, and yet they found reasons to pull aspects of the original into it. On top of that, aspects of pretty much every single movie that ever took place on a space shuttle are present here and you can see a lot of twists coming from a mile away. In the end, this works as a solid movie to watch on Netflix, but it does nothing new for this franchise and instead of expanding things, I found this third instalment to be one that chose to close a few doors that I was hoping to eventually explore further at some point in the future. The story is pretty generic, the direction is good enough, the performances are solid, and the tie-ins are cool, but ultimately predictable. The Cloverfield Paradox will be a nice watch for fans of the first film, but it's pretty average when looking at it as a film in its own right.

While it admittedly borrows elements from the well known entries of the space horror genre, the third film in the Cloverfield universe still comes off as fresh thanks to decent special effects and motivated actors. It's also shocking how many answers it actually offers, especially to the original film. The new one is fast, exciting and fun, if you are fine with ignoring some plot holes or techno babble. Decent entertainment either way.