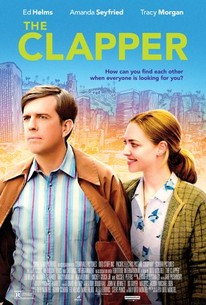 Critics Consensus: The Clapper is tugged along by the valiant efforts of a talented cast, but it's ultimately not enough to make this wan romantic comedy worth a watch.

Critics Consensus: The Clapper is tugged along by the valiant efforts of a talented cast, but it's ultimately not enough to make this wan romantic comedy worth a watch.

Critic Consensus: The Clapper is tugged along by the valiant efforts of a talented cast, but it's ultimately not enough to make this wan romantic comedy worth a watch.

EDDIE and his friend CHRIS, clap for a living as audience members on infomercials. They live a simple and content life, scraping by as the glitzy circus of Hollywood show-biz swirls around them. Eddie's only real excitement is his romance with local gas station attendant, JUDY, a beacon of light in a sea of monotony. But soon, Eddie's life is turned upside down when talk-show host JAYME STILLERMAN takes an interest in Eddie, launching a citywide media craze to uncover his true identity. The newfound fame costs him his job and Judy, who disappears without a trace. With no other choice, Eddie embarks into the world of late-night TV on a quest to hunt down his lost love.

News & Interviews for The Clapper

View All The Clapper News

Critic Reviews for The Clapper

Montiel treats his story's happily unsung oddballs with sincere affection. He doesn't hold them up to ridicule, or insist that they snap out of their quirkiness and conform. But he doesn't quite know what to do with them.

It's an interesting premise, but The Clapper doesn't live up to its namesake.

It may be early in the year, but it's a good bet "The Clapper" will land among 2018's worst films.

Even at a time of year when movie companies typically unload their dross, the sheer awfulness of Dito Montiel's "The Clapper" stands out.

Mostly it's a quiet salute to classic romantic comedy - and to a star who, frankly, is far nicer than the times he was born to work in.

The Clapper is a comedy that doesn't totally know what it wants to be, a commentary on fame and class or a romantic comedy. What we end up with is something that never really does both well and ends up hampering each theme.

The Clapper is not a film for everyone. It is a small film that has some charm as a sweet oddball rom com but which falls short in exploring its characters.

There's not much to applaud in this misguided offbeat comedy that fails to generate sufficient humor or poignancy from a broad satirical target.

The thin premise lacks any compelling elements, is absent of any engaging characters, and eventually goes nowhere.

An exercise in patience that rewards viewers with a tacked-on ending that simply reinforces the fact that this is a film filled with squandered talent and sloppy storytelling.

The concept here had potential, but the execution makes it completely dead on arrival.

Audience Reviews for The Clapper

Disappointing comedy with an unlikable main character and a rather uninteresting premise. Every scene with Seyfried is a delight but unfortunately there are long sequences in between that are neither on point nor particularly funny. The attempt to comment on the short moments of fame some internet sensations get to enjoy remains entirely superficial.