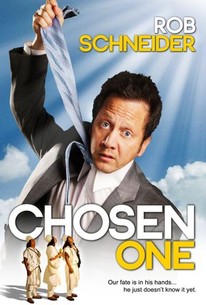 The Chosen One Photos

Hard-drinking car salesman Paul Zadzik (Rob Schneider) finds his miserable life starting to look up when a group of holy men appear on his doorstep and proclaim him to be a revered spiritual leader known as The Chosen One. Meanwhile, as Paul's cynical mother and Buddhist monk brother (Steve Buscemi) take great delight in singling out his many shortcomings, the man who always failed at everything - including marriage - discovers that all it takes to turn your life around is a little self-confidence, and the support of someone who really cares.

Kerri Randles
as Lily
View All

Critic Reviews for The Chosen One

Pulls every last one of its punches, and I wouldn't recommend a viewing to anyone beyond Schneider's core fanbase. Nevertheless, there are unusual elements to the film that prevent a complete dismissal.

Audience Reviews for The Chosen One

There are no featured audience reviews yet. Click the link below to see what others say about The Chosen One!

The Chosen One Quotes