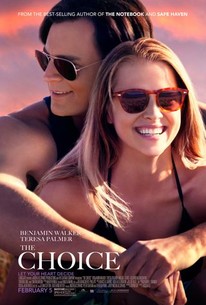 Critics Consensus: Like the 10 Nicholas Sparks movies before it, The Choice finds tragedy striking star-crossed lovers in the sun-dappled South -- yet even for those who loved its predecessors, this gauzy melodrama may feel painfully formulaic.

Critics Consensus: Like the 10 Nicholas Sparks movies before it, The Choice finds tragedy striking star-crossed lovers in the sun-dappled South -- yet even for those who loved its predecessors, this gauzy melodrama may feel painfully formulaic.

Critic Consensus: Like the 10 Nicholas Sparks movies before it, The Choice finds tragedy striking star-crossed lovers in the sun-dappled South -- yet even for those who loved its predecessors, this gauzy melodrama may feel painfully formulaic.

When feisty medical student Gabby Holland moves in next door to perennial ladies' man Travis Shaw, it sends them both on a romantic journey neither ever dreamed possible. Travis has always believed a serious relationship with a woman would cramp his easygoing lifestyle, while Gabby is all set to settle down her long-term boyfriend-until an irresistible attraction between the unlikely couple upends both of their well-planned lives. After a whirlwind courtship, Gabby and Travis wed and build a family together, making every decision hand-in-hand until one of them is forced to make the most important choice of their life alone. A poignant and life-affirming celebration of love, marriage and family that explores the most heart-wrenching question of all: how far would you go to keep the hope of love alive?

News & Interviews for The Choice

View All The Choice News

Critic Reviews for The Choice

We the people deserve every nutty coincidence, beautiful disaster, luxurious grief montage, and supernatural final-act reveal. Garbage-entertainment is still entertainment. Why, then, does The Choice almost entirely opt out of its own game?

You feel manipulated, but not in the I-can't-help-but-be-moved way that these films usually work. By the time its finale rolls around, The Choice has completely undone its own spell.

The latest Nicholas Sparks adaptation may turn off even his most ardent fans.

Even when things take a turn, the movie doesn't become more complicated or interesting; we simply start down an equally predictable new track.

The Choice feels like Mad Libs with some of Sparks' laziest clichés - a romantic rowboat, a colorful small-town carnival, a jealous upper-class boyfriend - and the result is a predictable, recycled mess.

As usual, love will be declared, tears will be shed, rain will fall, stars will be gazed at and dogs will be shamelessly anthropomorphized by their owners.

This movie was not very good and rather boring.

It was the biggest mess of them all.

The strangest thing in my eyes was the cakey, odd make-up and sullen lighting. That's something these types of movies usually nail.

A sappy, manipulative piece of work that feels like a live action Hallmark card.

The acting and story leave a lot to be desired, but the scenery and dogs make up in part for this major deficit.

There's absolutely nothing to cling on to, as a viewer that can engage you about this movie in terms of emotional content.

Audience Reviews for The Choice

Wavering between 3 and 3 1/2 stars. SPOILERS........I am not the biggest fan of Nicholas Spark's stories generally. This one was a little better than usual. I kind of liked the characters, even though they were stereotypes. The player good ol boy and the smart, uptight girl next door. I didn't recognize Tom Welling. I haven't seen him since his Smallville days and that little theme of her cheating on his character wasn't so flash, as he is a decent guy and I can't condone that behavior. However, it mostly works. Some romantic scenes, I found the relationship believable although so mismatched it seemed like it wouldn't work out. The rushing forward 7 years and having a family - all that could have been omitted honestly, as it added nothing to the story, you don't even learn the kids names. Plus neither of them aged a darn day, including her after her quite serious car accident. At least there wasn't a death. I was just waiting for that being a Nicholas Sparks story!!

My least favorite Nicholas Sparks film, but not bad. The first half of the film really does not make you fall in love with the characters. It's a long stretch to finally get to the part where you start to care. Unlike all of the previous Nicholas Sparks films, this just seems like a film you could pass on. The main characters really don't have the energy or great chemistry that previous actors have had in other films from Mr. Sparks. I was shocked the extras on the Bluray really only consisted of two deleted scenes that you could have passed on. This film felt rushed out and no love put into this movie like all other films. I always jump to see a Nicholas Sparks film, but this one really wasn't all that loving...

Melodramatic tripe, The Choice is yet another insipid romance film based on a Nicholas Sparks novel. The story follows a small town veterinarian who falls in love with his new next door neighbor, a nurse in-training who's dating a doctor. It's an incredibly formulaic and painfully predictable plot, and the characters are all pretty one-dimensional. Benjamin Walker and Teresa Palmer do have some chemistry together, and there are some nice supporting performances by Maggie Grace, Alexandra Daddario, and Tom Wilkinson. But overall, The Choice is a rather rote and unimpressive film.

Movies based on Nicholas Parks novels usually have the same general reaction from audience members. Anything from "A Walk to Remember" to "The Best of Me" have always been liked by teenage girls and disliked by the majority of everyone else, with the exception of "The Notebook" and "The Longest Ride." Personally, I enjoy both of those films. I am usually with the majority when it comes to Nicholas Sparks films. Directed by Ross Katz, starring Banjamin Walker & Teresa Palmer, and penned by Bryan Sipe, "The Choice" is a Nicholas Sparks adaption that I may just be in the minority on. Is it a great film? Absolutely not, not but the cast and main focus of the film had me intrigued. Throughout this film, characters fall in and out of love. Focussing in on two couples as one is back and forth while the other is long distance, the two who now live next door, form a bond that they never expected. Creating more complications than they expected, their relationship blossoms into some very enjoyable chemistry between Teresa Palmer and Benjamin Walker. Maybe I am a sucker for country-esque setting or films that take place on a beach most of the time, but there was a very calming feeling throughout this picture that put me at ease. I found myself chuckling at a lot of the dialogue throughout this film, which is not a good thing, due to the fact that I enjoyed watching these characters interact. The characters were likeable, but what they said to one another felt more like a high school play than a Hollywood feature at times. "The Choice" boasts a soothing score and a cast that gives it their all into making the audience believe they are really in love, but what felt missing was the element of surprise. Beginning with a scene that clearly takes place during the climax of the film, you can see a horrible incident coming from a mile away, leaving any surprises out and making the film much more predictable than I am sure the filmmakers intended. The first and second acts of this film have a very light tone to them, so when the big incidents begin to happen toward the end of the film, I believe it will feel very jarring to the average moviegoer. Most of these films have similar themes, so when talking about them, they seem to have the same tiring result. A film that tries very hard to make you love it's characters, while still being confused with it's story and not following through on everything you wish was in it's final act. As far as Nicholas Sparks adaptions go, this is one of the better ones I have seen in a while, but that is not saying much. I saw most of this film coming from a mile away. I enjoyed watching this cast together, but it is ultimately as forgettable as the majority of the fares within this generic genre. Great romance films are slim to none these days. When a great one comes out, it sticks out like a sore thumb and it takes forever for another to pass it by. I am talking about "Silver Linings Playbook." "The Choice" tries very hard to make you like it's characters and it's premise, and while some of those elements work, the film is still forgettable. Recommendable? To young women, yes.