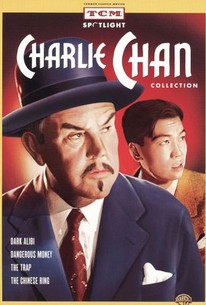 Roland Winters takes over the role of wily oriental sleuth Charlie Chan in the so-so Monogram programmer The Chinese Ring. The film is a remake of 1939's Mr. Wong in Chinatown, right down to dialogue and camera angles. Charlie Chan gets dragged into the story when a beautiful Chinese princess (Jean Wong) drops dead in his living room. Chan's only clue to the murderer and his motives is the letter "K," leading him to such likely suspects as Captains Kelso (Thayer Roberts) and Kong (Philip Ahn). Aiding and abetting Chan at every turn are his erstwhile "assistants," son Tommy (Victor Sen Yung) and chauffeur Birmingham Brown (Mantan Moreland), not to mention loud-mouthed police sergeant Davidson (Warren Douglas) and perky gal reporter Peggy Cartwright (Louise Currie). The fact that Roland Winters refuses to take his role seriously greatly enhances the film's enjoyment.

Critic Reviews for The Chinese Ring

...the first film to star Roland Winters as Charlie Chan.

There are no featured reviews for The Chinese Ring at this time.