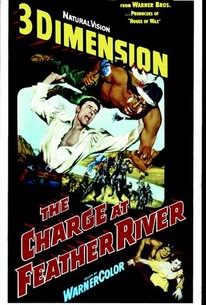 With all those flaming arrows being aimed directly at the audience, it is fairly obvious that Charge of Feather River was originally released in 3D. Fresh from his TV success as Wild Bill Hickok, Guy Madison stars as frontiersman Miles Archer (his character name will be amusing to fans of The Maltese Falcon). In the company of cavalry sergeant Baker (Frank Lovejoy) and a column of troops, Archer heads into Indian country to rescue a pair of white female captives. One of the two girls, Ann McKeever (Helen Westcott), is reluctant to return because she's been despoiled by her Indian captors; the other girl, Ann's sister Jennie (Vera Miles), is in love with the tribal chief and intends to betray her rescuers at the first opportunity. The rescue has been staged to divert the Indians' attention away from the railroad that is being constructed across their territory. The trick now is for Archer, the soldiers and the women to return to Cavalry headquarters in one piece. The film ends with the eponymous charge, excitingly staged by director Gordon Douglas. ~ Hal Erickson, Rovi

Dick Wessel
as Cullen
View All

Critic Reviews for The Charge At Feather River

Unless you get tired of ducking a volley of missiles ranging from a tomahawk to a big wad of tobacco juice, you may find this one a rather exciting cavalry-versus-lnjuns western, in 3-D that is more effective than usual.

It was the biggest grossing Western in 1953 and is considered by many as the best 3-D Western of the 1950s.

There are no featured reviews for The Charge At Feather River at this time.

The Charge At Feather River Quotes