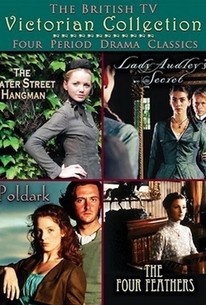 The first of several British TV adaptations of Ann Perry's "Inspector Pitt" mystery novels, The Cater Street Hangman stars Eoin McCarthy as Thomas Pitt, an extremely class-conscious police detective working London in 1881. The case at hand involves the brutal and bizarre murders of several young girls who have recently visited the vicarage in a well-to-do neighborhood. Much to his surprise (and secret delight), Inspector Pitt is aided in his investigation by Charlotte Ellison (Keeley Hawes), an independent, free-thinking young aristocrat who has obviously set her stylish cap for the humble lawman. Fans of Perry's original novel should be advised that the ending has been changed, eliminating all hints of what once was known as "the love that dare not speak its name." In the United States, The Cater Street Hangman was broadcast by cable's A&E network on December 19, 1998.

Hannah Spearritt
as Lily
View All

We have the first of what looks to be a promising string of two-hour TV movies based on Inspector Pitt.

There are no featured reviews for The Cater Street Hangman at this time.