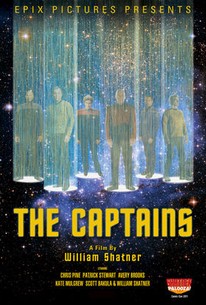 The Captains is a feature length documentary film written and directed by William Shatner. The film follows Shatner as he interviews the other actors whom have portrayed Starship captains within the illustrious science-fiction franchise.

Critic Reviews for The Captains

By offering an insightful look at some of the key players that made it happen, Shatner is able to break down some of the barriers that scare some people off from the Star Trek franchise.

Audience Reviews for The Captains

Not being a die hard Trekkie but being a casual fan of the original series and the theatrical films I approached this cautiously. It turned out to be quite fascinating though since it deals with a singular experience experienced by these six people and the challenges and joys derived from it by them.

Or as I refer to it...the William Shatner marathon of self indulgent memories, OK OK I jest. Directed, produced and written by the Shat himself, a one man army exploring the difficulties, struggles, stigmas and sacrifices that accompany the huge responsibility of playing the captain of the starship Enterprise. But as you can guess from the title Shatner travels around the globe (kinda) to seek out the other captains where ever they may be and natter about the past. So as all Trekkies will know the other captains interviewed in this documentary are Patrick Stewart, Scott Bakula, Avery Brooks, Kate Mulgrew and Chris Pine. Obviously this being a Star Trek feature you can't ignore other cast members from the TV shows and movies so you also get to see and hear from people like Christopher Plummer, Johnathan Frakes, Robert Picardo, Rene Auberjonois etc...Its an across the board (across the ages) feature that delves deep...or does it? One by one Shatner meets up with his fellow acting colleagues to discuss all things Star Trek and portraying the various captains...but actually they don't! To my surprise much of the conversations to begin with tend to revolve around their past work, previous jobs and gigs, how they started in acting etc...One or two of them even chat about their other skills and interests such as singing and playing instruments (Bakula and Brooks). Now don't get me wrong this is all quite interesting for the most part (I never knew Bakula was a singer), but I kinda wanted to hear about all things Star Trek, not their personal lives or backgrounds before hand. The whole point to this documentary was for Shatner to express how he and his fellow colleagues coped with the daily pressures of playing the captain in a hit show. The long slog of making many episodes with long hours over many years and then the inevitable typecasting that would follow afterwards. We do get this but it takes a bit of time for the cast to get onto this subject. Like I said at first its mostly about what they did before Star Trek which I personally wasn't too bothered about. Eventually all the stars talk about their own personal demons and hindrances along the way with Stewart mentioning how hard it was to follow on from the original series and the character of Kirk, to Mulgrew talking about how tough it was trying to raise her kids whilst making the show. You do learn some interesting tit bits but nothing overly earth shattering or that you haven't heard before. Its cool to see all the cast members (although this was four years ago now). Bakula still has a youthful energetic persona and looks, Mulgrew is still the same but a little rounder in the face, Stewart never really seems to change, Pine is of course still young so no change there, but the most surprising thing was Brooks coming across as a tad eccentric in his old age...but pleasantly so. He seemed a bit lost in his own world, not really concentrating, distant and as though he was unaware of what was going on, but happy at least. The odd interviews with other stars briefly cover what they experienced on the TV show or movie, depending, again its not all Star Trek as they do touch on their past careers. There is also some convention footage with Shatner which is cool, we hear how Shatner never used to like the conventions and avoided them, but over time realised how important they were and how much attention he got (yep we all the Shat by now). Even though the feature is suppose to be about all the ex-captains it naturally tends to focus more on Shatner and his issues but I guess it is his production. I did get the impression Shatner was kinda fishing for compliments from the other cast members, almost looking for a shoulder to cry at some points. At the end he reveals how much he disliked the character of Kirk but has now come to accept him and enjoy the notion that he will forever be remembered as Kirk. Did Shatner really need to make an entire documentary supposedly about all the Star Trek captains just to show us this revelation? Well I'll let you decide that one. Honesty there isn't much that is discussed that will blow you away, its pleasant listening and viewing but overall it feels a little bit unnecessary at times. I really dunno why Shatner didn't just call the doc 'The Captain' whilst including the other cast members as its really all about him. That's not a bad thing as Shatner is a strangely likeable guy despite his large ego. None the less its a must watch for any Trekkies and a solid watch for any sci-fi fanboys like myself. It will make you smile and maybe...just possibly bring a lump to your throat on the odd occasion.

In the documentary "The Captains," William Shatner travels to talk to the other actors, Patrick Stewart, Avery Brooks, Kate Mulgrew, Scott Bakula and Chris Pine, who have played captains in Star Trek over the years.(Missing is any mention of Genevieve Bujold who was originally cast as the lead in "Star Trek: Voyager" which would have been wild.) He also gets a chance to talk to old pal Christopher Plummer who played a Klingon in "Star Trek VI." The results are pleasant enough, and much less awkward than the first time Shatner and Stewart met onscreen in "Star Trek: Generations" in proving to Star Trek fans(for the record, I know just enough Klingon to get my face slapped) that these actors that they venerate have done other things in their lives and careers, not to mention the level of commitment involved.(And thanks for mentioning "Boston Legal" by the way.) What may surprise many is the fact that Stewart is not the only theater veteran amongst them with a couple being very much musically inclined. Throughout, Shatner is seen enjoying himself by engaging with fans at a convention in Las Vegas and proves with his outgoing personality why he would make a good stand up comic. Not to take anything away from any of that, but Harlan Ellison(you know I was going to bring him up, right?) pointed out in his review of "Star Trek IV" that the series are as much about the crews as they are the captains.