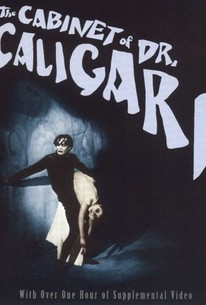 Critics Consensus: Arguably the first true horror film, The Cabinet of Dr. Caligari set a brilliantly high bar for the genre -- and remains terrifying nearly a century after it first stalked the screen.

Critics Consensus: Arguably the first true horror film, The Cabinet of Dr. Caligari set a brilliantly high bar for the genre -- and remains terrifying nearly a century after it first stalked the screen.

Critic Consensus: Arguably the first true horror film, The Cabinet of Dr. Caligari set a brilliantly high bar for the genre -- and remains terrifying nearly a century after it first stalked the screen.

In one of the most influential films of the silent era, Werner Krauss plays the title character, a sinister hypnotist who travels the carnival circuit displaying a somnambulist named Cesare (Conrad Veidt). In one tiny German town, a series of murders coincides with Caligari's visit. When the best friend of hero Francis (Friedrich Feher) is killed, the deed seems to be the outgrowth of a romantic rivalry over the hand of the lovely Jane (Lil Dagover). Francis suspects Caligari, but he is ignored by the police. Investigating on his own, Francis seemingly discovers that Caligari has been ordering the somnambulist to commit the murders, but the story eventually takes a more surprising direction. Caligari's Expressionist style ultimately led to the dark shadows and sharp angles of the film noir urban crime dramas of the 1940s, many of which were directed by such German émigrés as Billy Wilder and Robert Siodmak.

Rudolf Klein-Rogge
as A Criminal

Caligari, the most complete essay in the décor of delirium, is one of the most famous films of all time, and it was considered a radical advance in film technique, yet it is rarely imitated -- and you'll know why.

[That Wiene], this outsider, with no knowledge of studio customs, no reverence for studio traditions, should have turned out The Cabinet of Dr. Caligari seems a thing almost too strange for belief.

The mother lode of the horror genre, this German Expressionist movie is directed by Robert Wiene and presents a full smorgasbord of pop-eyed terror, lunatics, murderers and possessed somnambulists in its eerie shadows.

Warped in all senses, fascinating and bizarre ...

Just as dreams take complex personalities and boil them down to friend or foe, so too The Cabinet of Dr Caligari brims with archetypes: the demented doctor, the handsome hero, the innocent ingénue.

A case can be made that Caligari was the first true horror film.

The picture sets itself the task of raising your hair from your head, and it succeeds from the moment the actors appear in the prologue.

The Cabinet of Dr. Caligari is one of cinema's most enduring masterpieces.

The Cabinet of Dr. Caligari illustrates something more eternal: about great manipulators, and the underlying anxiety that either society has gone mad, or we have.

A twisted tale of murder, kidnap, madness and an ancient book, all told in flashback by a young man from a park bench.

A terrifying and highly influential milestone of German Expressionism, and also a radically anti-bourgeois work of art that intended back then to express with its chilling stylized visuals the deepest feelings of a post-war society in crisis and in search of artistic innovation.

An unforgettable masterpiece of German Expressionism.

Beyond being an iconic milestone in the evolution of cinema, Robert Wiene's masterpiece is still as entertaining as ever. The truly great films never go out of style.

Probably the best silent film I have ever seen, Caligari has a clear emphasis on German Expressionism while also being a methodically psychological horror film about the supernatural and the surreal imagination of the insane. Silent films started off as filmed plays, and in that vein this film constructed all its sets by hand, painting them in odd patterns, and showing interesting angles and vacant shots of this small village. Besides the interesting set design for the walls and floors, the stairs and windows were strange as well. The slanting light (possibly natural) barely illuminated the creeping corners and mororse faces of the townspeople. The town itself is romanticized in the loose culture of the times, being small and simple, without the benefits of electricity or modern technology. Much of this was candlelit which lent to an atmosphere where monsters and creepy crawlies could be behind the next wall just waiting to murder you. Not such a stretch since a string of murders mysteriously starts after the appearance of the gypsy centric fair and a tent advertising a coma creep controlled by a large eyebrowed crone named Dr. Caligari. The somnambulist, or coma patient, is a vampiric man who lays within a box and predicts the future based on some unnamed psychic abilities. The look of it and the intricate storyline lends to a very creepy vibe. The characters all express their emotions in a wide and overdramatic way, as this is a German Expressionist film. Everything is bigger, darker, more hurried and vague, and you never quite know who the villain is. Beside that you are always theorizing whether there is any true magic, or it's medicine, or frankly a dream of an insane person. Nothing is ever clear or true, and that leads to feeling unsettled and uneasy over what is on the screen. True, it's silent, and true the characters are at times bland, but it's the storytelling and the fact that it's a horror film that keeps the suspense and the intensity alive. It's a horror film that will have staying power through the decades to come.