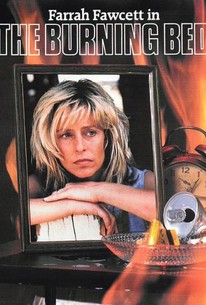 Farrah Fawcett earned Emmy and Golden Globe nominations for her portrayal of Francine Hughes in the television movie The Burning Bed. The film is structured as a series of flashbacks while Francine's character endures a murder trial after she poured gasoline on her sleeping spouse and burned him to death. Her husband Mickey (Paul Le Mat) drove her over the edge after years of physical and emotional abuse when he rapes her. Television regular Richard Masur has a prominent co-starring role. Fawcett parlayed her work in this film into a series of more serious movies, including Extremities and Poor Little Rich Girl: The Barbara Hutton Story.

Critic Reviews for The Burning Bed

There are no critic reviews yet for The Burning Bed. Keep checking Rotten Tomatoes for updates!

Audience Reviews for The Burning Bed

A realistic, yet predictable and boring drama. I saw this on TV a while ago, it's an average drama.

Based on a true story this movie showed the perils of what a mother and her children had to put up with from a mentally unwell abusive husband~!!!!!!!

Haven't seen this in years.

Unfortunatly it takes the death of an actor/actress for some people to actually take notice of their career and work. I fyou are one of those poeple doing so with Farrah r.i.p. this should be the movie you watch. Farrah delivers a powerhouse performance as a battered wife who gets pushed too far. Good supporting cast as well expecially from Paul Lemat as her abusive spouse. A must see!