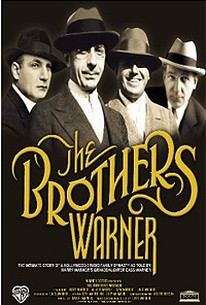 Filmmaker Cass Warner Sperling explores the story of her grandfather Harry Warner and his three brothers Abe, Sam, and Jack, who forever changed the face of Hollywood by creating Warner Brothers Studios. It all started with a simple storefront theater, cobbled together with spare chairs from a funeral home and a sheet tacked to the wall. Few could have foreseen that the four brothers behind that endeavor would eventually go on to create one of the most powerful movie studios ever. Each endured their fair share of personal hardships along the way, but the fruits of their labors can still be tasted today thanks to the success of films like Clint Eastwood's Gran Torino. The Warner Brothers believed that as filmmakers they bore a heavy social responsibility to create films that weren't just entertaining, but socially relevant as well. This is the story of four brothers who never compromised their original vision, told by the very people who knew them best.

Critic Reviews for The Brothers Warner

The four Warner Brothers would certainly be proud of The Brothers Warner...lives up to their legacy...

Told from the insider's perspective of Harry Warner's granddaughter Cass Warner, comes a slightly Michael Moore-esque look at the establishment of the Warner empire in Hollywood.

There are no featured reviews for The Brothers Warner at this time.